Webb oversaw NASA from the beginning of the Kennedy administration through the end of the Johnson administration, thus overseeing all the critical first manned launches in the Mercury through Gemini programs, until just before the first manned Apollo flight. He also dealt with the Apollo 1 fire.

Webb was born in the hamlet of Tally Ho in Granville County, North Carolina. His father was superintendent of the Granville County public schools. He completed his college education at the University of North Carolina at Chapel Hill, where he received an A.B. degree in education in 1928. He was a member of the Acacia Fraternity. Webb became a second lieutenant in the United States Marine Corps, and he served as a Marine Corps pilot on active duty in 1930–32. Webb then studied law at the The George Washington University Law School where he received a J.D. degree in 1936. In the same year he was admitted to the Bar of the District of Columbia.

Webb enjoyed a long career in public service in Washington, D.C., first serving as a secretary to US Rep. Edward W. Pou of North Carolina in 1932–34. He next served as an assistant in the office of O. Max Gardner, an attorney and former governor of North Carolina, in 1934–36. In 1936, Webb became the personnel director, the secretary-treasurer, and later the vice president of the Sperry Gyroscope Company in Brooklyn, New York, before he re-entered the Marine Corps in 1944 during World War II.

After World War II, Webb returned to Washington and served as executive assistant to O. Max Gardner, by then an undersecretary in the U.S. Department of the Treasury, before being named as the director of the Bureau of the Budget in the Office of the President of the United States, a position that he held until 1949. President Harry S. Truman next nominated Webb to serve as an undersecretary of state in the U.S. Department of State.

Serving as Undersecretary of State during the Era of McCarthy, Webb was instrumental in implementing stringent personnel requirements intended to prevent suspected anarchists, communists and homosexuals from employment with the Department of State. Webb singled out homosexuals in a later report, noting "It is generally believed that those who engage in overt acts of perversion lack the emotional stability of normal persons."When the Truman administration ended in January 1953, Webb left Washington for a position in the Kerr-McGee Oil Corp. in Oklahoma City, but he was still active in government circles, for instance serving on the Draper Committee in 1958. Webb presents NASA's Group Achievement Award to Kennedy Space Center Director Kurt H. Debus, while Werner von Braun (center) looks on.
Webb returned to Washington in 1961 when he accepted the position of the Administrator of NASA. Under his direction, the agency undertook to achieve the goal set by President John F. Kennedy of landing an American on the Moon before the end of the 1960s through the Apollo program.

For seven years after Kennedy's May 25, 1961, announcement of the goal of a manned lunar landing, through October 1968, Webb lobbied for support for NASA in Congress. As a longtime Washington insider, and with the backing of President Lyndon B. Johnson, he was able to produce continued support for and resources for Apollo.

During his administration, NASA developed from a loose collection of research centers into a coordinated organization. Webb had a key role in creating the Manned Spacecraft Center, later, the Johnson Space Center, in Houston, Texas. Despite the pressures to focus on the Apollo program, Webb ensured that NASA carried out a program of planetary exploration with the Mariner and Pioneer space programs.

After the Apollo 1 accident in 1967, Webb told the media, "We've always known that something like this was going to happen sooner or later. ... Who would have thought that the first tragedy would be on the ground?" Webb went to President Johnson and asked that NASA be allowed to handle the accident investigation, and to direct its recovery. He promised to be truthful in assessing blame, and he pledged to assign that to himself and NASA management, as appropriate. The agency set out to discover the details of the tragedy, to correct problems, and to continue progress toward the Apollo 11 lunar landing.

Webb reported his investigation's findings to various congressional committees, and he took a personal grilling at nearly every meeting. Whether by happenstance or by design, Webb managed to deflect some of the backlash over the accident away from both NASA as an agency and from the Johnson administration. As a result, NASA's image and popular support were largely undamaged.

However, Webb was a Democrat tied closely to Johnson, and, with Johnson choosing not to run for reelection, he decided to step down as administrator to allow the next president to choose his own administrator.

Webb was informed by CIA sources in 1968 that the Soviet Union was developing its own heavy N1 rocket for a manned lunar mission, and he directed NASA to prepare Apollo 8 for a possible lunar orbital mission that year. At the time Webb's assertions about the Soviet Union's abilities were doubted by some people, and the N-1 was dubbed "Webb's Giant". However later revelations about the Soviet Moonshot – after the collapse of the USSR – have given support to Webb's conclusion. Webb left NASA in October 1968, just before the first manned flight in the Apollo program.

In 1969, Webb was presented with the Presidential Medal of Freedom by President Johnson. He is a 1976 recipient of the Langley Gold Medal from the Smithsonian Institution.

James Webb Space Telescope to Earth: It Can Now Connect! 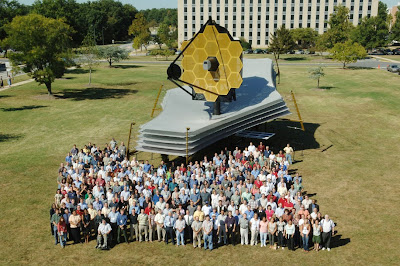 JWST will have a large mirror, 6.5 meters (21.3 feet) in diameter and a sunshield the size of a tennis court. Both the mirror and sunshade won't fit onto the rocket fully open, so both will fold up and open once JWST is in outer space. JWST will reside in an orbit about 1.5 million km (1 million miles) from the Earth.
For Scientists
This page and the set of links available from this page are for the use of astronomers who would like to learn more about using JWST for their research programs. A detailed description of the science capabilities and instruments on JWST can be found in the Space Science Reviews paper (external link) by Gardner et. al. A brief synopsis of the JWST science themes can be obtained here. White papers written by the JWST Science Working Group can be found here.
For technical information about the status, design and plans for JWST, you can go to http://spie.org and search for “webb" and "jwst”. On that site there are more than 500 technical articles about JWST. (Note there is a fee per article on that site without an institutional subscription.)
You may also be interested in visiting the Images & Videos section of our website.
Once it launches in 2013, the James Webb Space Telescope will be able to communicate and connect with the Earth thanks to a modified "off-the-shelf" computer software system that has been recently and successfully tested.

The customized off-the-shelf computer system, the Raytheon Corporation’s ECLIPSE product, will be used to send commands to the Webb telescope and collect its telemetry data. Telemetry means that a spacecraft in orbit makes automatic measurements and transmits them to the Earth using a radio signal. The information sent also includes information describing the health of the spacecraft. It's important for the engineers on the ground receiving the information, to know that the James Webb Space Telescope is working well. If it isn't, they need to try and fix it from the ground, sending commands to the spacecraft's computer system using a radio signal, so it can repair its software.

Two companies worked together to modify the telemetry system: Northrop Grumman and the Raytheon Corporation. Recently, they completed the tests that made sure it worked properly and specifically for the James Webb Space Telescope. It turns out that the same modifications they made for the Webb telescope can be used in another upcoming space satellite called "NPOESS."

This is the first time a team included engineers from two different spacecraft programs, the Webb telescope and the NPOESS satellite. Alexis Livanos, Corporate Vice President and President of Northrop Grumman’s Space Technology sector said "Two customers with two separate programs were willing to trust our collaboration and teamwork to align schedules so that the same system could be used."

The key for the success was testing the telemetry system. So, Northrop Grumman and Raytheon increased test requirements to bring together the way two different satellites communicate and the needs of their users. Software requirements were checked on the spacecraft and ground equipment simulators at Northrop Grumman over a four-week period that ended in August. Image right: The Webb telescope sends data to ground stations on Earth, which route the data to the Space Telescope Science Institute for processing and distribution. Click image for higher resolution. Credit: STScI

That testing was the last step in a process that took four years of development at Raytheon. Raytheon was responsible for developing this system for Northrop Grumman. Engineers and scientists at Northrop are actually building the spacecraft. During the tests, 1300 requirements were met. The tests checked the ability to send commands from equipment to equipment, receive telemetry (or communications), and to control and monitor the test hardware.

Recently, the modified telemetry software was delivered to scientists and engineers at the Goddard Space Flight Center who will use it to develop, test, and add it into their instruments for the James Webb Space Telescope.

The James Webb Space Telescope, designed to succeed the Hubble Space Telescope, will be NASA's premier space observatory. Northrop Grumman is the prime contractor, leading a team in the telescope’s design and development under contract to NASA Goddard. NPOESS is the nation's next-generation low-Earth orbiting remote sensing system and will provide environmental data to military and civilian users. Both are scheduled for launch in 2013.

Instruments
The Integrated Science Instrument Module, or ISIM, is the heart of the JWST, what engineers call the main payload. This is the unit that will house the four main JWST instruments. The ISIM is like a chassis in a car providing support for the engine and other components.
The four instruments that attach to the ISIM are:

The ISIM includes the following instruments: The James Webb Space Telescope will be a giant leap forward in our quest to understand the Universe and our origins.  The Webb will examine every phase of cosmic history: from the first luminous glows after the Big Bang to the formation of galaxies, stars, and planets to the evolution of our own solar system.  The science goals for the Webb can be grouped into four themes:

The observations needed to accomplish these goals require a telescope that can study the Universe in infrared light.  For this, it needs to be cooled till it is just a few tens of degrees above Absolute Zero.  To accomplish this goal, the Webb will reside far from the Earth at the L2 region.  Why does Webb need to be at L2?

We now have a series of videos that highlight the science that will be peformed by the James Webb Space Telescope.

A detailed description of the science capabilities and instruments on Webb can be found in the Space Science Reviews paper by Gardner et. al.