“You cannot simultaneously prevent and prepare for war.”

The Lockheed Martin F-35 Lightning II is a family of single-seat, single-engine, fifth generation multirole fighters under development to perform ground attack, reconnaissance, and air defense missions with stealth capability.[9][10] The F-35 has three main models; one is a conventional takeoff and landing variant, the second is a short take off and vertical-landing variant, and the third is a carrier -based variant. The F-35 appears to be a smaller, slightly more conventional, single-engine sibling of the sleeker, twin-engine Lockheed Martin F-22 Raptor, and indeed drew elements from it. The exhaust duct design was inspired by the General Dynamics Model 200 design, which was proposed for a 1972 supersonic VTOL fighter requirement for the Sea Control Ship.[67] For specialized development of the F-35B STOVL variant, Lockheed consulted with the Yakovlev Design Bureau, purchasing design data from their development of the Yakovlev Yak-141 "Freestyle".[68][69] Although several experimental designs have been built and tested since the 1960s including the Navy's unsuccessful Rockwell XFV-12, the F-35B is to be the first operational supersonic, STOVL stealth fighter.[70]

The F-35 has a maximum speed of over Mach 1.6. With a maximum takeoff weight of 60,000 lb (27,000 kg),[N 3][72] the Lightning II is considerably heavier than the lightweight fighters it replaces. In empty and maximum gross weights, it more closely resembles the single-seat, single-engine Republic F-105 Thunderchief, which was the largest single-engine fighter of the Vietnam war era. However the F-35's modern engine delivers over 60 percent more thrust in an aircraft of the same weight so that in thrust to weight and wing loading it is much closer to a comparably equipped F-16.[N 4]


Acquisition deputy to the assistant secretary of the Air Force, Lt. Gen. Mark D. "Shack" Shackelford has said that the F-35 is designed to be America's "premier surface-to-air missile killer and is uniquely equipped for this mission with cutting edge processing power, synthetic aperture radar integration techniques, and advanced target recognition."[74][75]
Some improvements over current-generation fighter aircraft are:

Lockheed Martin claims the F-35 is intended to have close and long-range air-to-air capability second only to that of the F-22 Raptor.[9] The company has suggested that the F-35 could also replace the USAF's F-15C/D fighters in the air superiority role and the F-15E Strike Eagle in the ground attack role, but it does not have the range or payload of either F-15 model.[81] The F-35A does carry a similar air-to-air armament as the Boeing F-15SE Silent Eagle when both aircraft are configured for low observable operations and has over 80 percent of the larger aircraft's combat radius.[82]

The majority of the structural composites in the F-35 are made out of bismaleimide (BMI) and composite epoxy material.[83] However the F-35 will be the first mass produced aircraft to include structural nanocomposites, Carbon nanotube reinforced Epoxy.[84]

The F-35 program has learned from the corrosion problems that the F-22 had when it was first introduced in 2005. The F-35 uses a gap filler that causes less galvanic corrosion to the skin, is designed with fewer gaps in its skin that require gap filler, and has better drainage.[85] 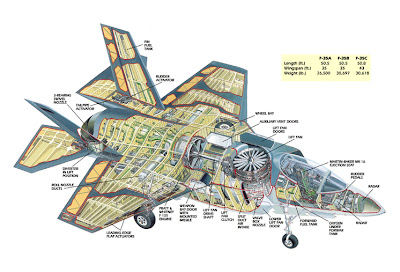 The F-35's main engine is the Pratt & Whitney F135. The General Electric/Rolls-Royce F136 is being developed as an alternative engine.[88] The F135/F136 engines are not designed to supercruise in the F-35.[89] The STOVL versions of both power plants use the Rolls-Royce LiftSystem, patented by Lockheed Martin and built by Rolls-Royce. This system is more like the Russian Yak-141 and German VJ 101D/E than the preceding generation of STOVL designs,[90] such as the Harrier Jump Jet in which all of the lifting air went through the main fan of the Rolls-Royce Pegasus engine.[91]

The Lift System is composed of a lift fan, drive shaft, two roll posts and a "Three Bearing Swivel Module" (3BSM).[92] The 3BSM is a thrust vectoring nozzle which allows the main engine exhaust to be deflected downward at the tail of the aircraft. The lift fan is near the front of the aircraft and provides a counter-balancing thrust using two counter-rotating blisks.[93] It is powered by the engine's low-pressure (LP) turbine via a drive shaft and gearbox. Roll control during slow flight is achieved by diverting unheated engine bypass air through wing mounted thrust nozzles called Roll Posts.[94][95] Like lift engines, the added lift fan machinery increases payload capacity during vertical flight, but is dead weight during horizontal flight. The cool exhaust of the fan also reduces the amount of hot, high-velocity air that is projected downward during vertical take off, which can damage runways and aircraft carrier decks.[citation needed]

To date, F136 funding has come at the expense of other parts of the program, reducing the number of aircraft


built and increasing their costs.[96] The F136 team has claimed that their engine has a greater temperature margin which may prove critical for VTOL operations in hot, high altitude conditions.[97]


The F135 is the second (radar) stealthy afterburning jet engine and like the Pratt & Whitney F119 from which it was derived, has suffered from pressure pulsations in the afterburner at low altitude and high speed or "screech". In both cases this problem was fixed during development of the fighter program.[100]
Turbine bearing health in the engine will be monitored with thermoelectric powered wireless sensors.[101]

The F-35A includes a GAU-22/A, a four-barrel version of the GAU-12 Equalizer 25 mm cannon.[102] The cannon will be mounted internally with 180 rounds in the F-35A and fitted as an external pod with 220 rounds in the F-35B and F-35C.[103][104] The gun pod for the B and C variants will have stealth features. This pod could be used for different equipment in the future, such as EW, reconnaissance equipment, or possibly a rearward-facing radar.[105]


Internally, up to two 2,000 lb (910 kg) air-to-ground bombs can be carried in A and C models (BRU-68) (two 1,000 lb (450 kg) bombs in the B model (BRU-67)[106][107]) along with two smaller weapons, normally expected to be air-to-air missiles. Lockheed Martin says on its website that the weapons load can also be configured as all-air-to-ground or all-air-to-air, and has suggested that a Block 5 version will be able to carry three internal weapons per bay instead of two, replacing the heavy bomb with two smaller weapons such as AIM-120 AMRAAM air-to-air missiles.[108]

Missiles and bombs to be carried inside the weapon bays include AIM-120 AMRAAM, AIM-132 ASRAAM, the Joint Direct Attack Munition (JDAM) – up to 2,000 lb (910 kg), the Joint Stand off Weapon (JSOW), Small Diameter Bombs (SDB) – a maximum of four in each bay (three per bay in F-35B,[109] or four GBU-53/B in each bay for all F-35 variants;[110] a set of up to four small diameter bombs takes the place of a single larger bomb), Brimstone anti-armor missiles, and Cluster Munitions (WCMD).[107] The MBDA Meteor air-to-air missile is currently being adapted to fit four internally in the missile spots and may be integrated into the F-35. A modified Meteor design with smaller tailfins for the F-35 was revealed in September 2010.[111] The United Kingdom had originally planned to put up to four AIM-132 ASRAAM internally but this has been changed to carry 2 internal and 2 external ASRAAMs.[112] The external ASRAAMs will add only an insignificant amount to the F-35's radar cross section and will allow attacks to slightly beyond visual range without using radar that might alert the target.[113]

At the expense of being more detectable by radar, many more missiles, bombs and fuel tanks can be attached on four wing pylons and two near wingtip positions. The two wingtip locations can only carry AIM-9X Sidewinder. The other pylons can carry the AIM-120 AMRAAM, Storm Shadow, AGM-158 Joint Air to Surface Stand-off Missile (JASSM) cruise missiles, guided bombs, 480 US gallons (1,800 L) and 600 US gallons (2,300 L) fuel tanks.[114] An air-to-air load of eight AIM-120s and two AIM-9s is conceivable using internal and external weapons stations, as well as a configuration of six 2,000 lb (910 kg) bombs, two AIM-120s and two AIM-9s.[107][115] With its payload capability, the F-35 can carry more weapons payload than the legacy fighters it is to replace as well as the F-22 Raptor.[116] Solid-state lasers were being developed as optional weapons for the F-35 as of 2002.[117][118][119]


While the F-35 will take on the Wild Weasel mission, it will lack the ability to carry an anti-radiation missile internally (and therefore stealthily) until the JDRADM is fielded in 2025.[120]

Norway and Australia are funding a program to adapt the Naval Strike Missile (NSM) to fit the internal bays of the F-35. This will be a multirole version, named the Joint Strike Missile (JSM), and will be the only cruise missile to fit the internal bays. Studies have shown that the F-35 would be able to carry two of these internally, while four additional missiles could be carried externally. The missile has an expected range in excess of 150 nmi (278 km).[121] On 12 April 2011 the Norwegian Ministry of Defence announced phase 2 of development with a cost estimate of 1029 MNOK.[122]