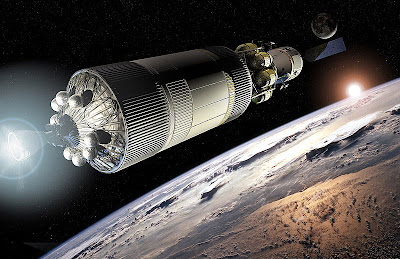 Constellation was developed through the Exploration Systems Architecture Study, which determined how NASA would pursue the goals laid out in the Vision for Space Exploration and the NASA Authorization Act of 2005, to send astronauts first to the International Space Station, then to the Moon, and afterward to Mars and other destinations beyond.[2]

Constellation Program (abbreviated CxP) was a human spaceflight program within NASA, the space agency of the United States.

On February 1, 2010, President Barack Obama announced a proposal to cancel the program, effective with the U.S. 2011 fiscal year budget,[5][6][7][8] but later announced changes to the proposal in a major space policy speech at Kennedy Space Center on April 15, 2010. Obama signed the NASA Authorization Act of 2010 on October 11 which brought the program to an end,[9] but Constellation contracts remain in place until Congress acts to overturn the previous mandate.[10][11] The program has been replaced by the U.S. National Space Policy of the Barack Obama administration. NASA announced that it had selected the design of the Space Launch System in September 2011.[12]


With the Reduced Gravity Education Flight Program, students and teachers experience hands-on, minds-on science applications as they successfully propose, design, fabricate, fly and evaluate a reduced gravity experiment onboard NASA's Weightless Wonder aircraft. By flying a modified parabola, the aircraft is able to provide students an environment for testing research and equipment in simulated lunar gravity. This offers students an opportunity to gain a better understanding of what it will take to return to and live on the moon.

In order to build the next generation of space vehicles, we will need systems engineers who can manage the complexities of the systems which will carry us back to the moon and beyond.

Join NASA in the journey back to the moon by participating in the NASA Engineering Design Challenge in which K-12 students will design, build, and evaluate their own lunar plant growth chambers. Participants will receive basil seeds, that were flown in space, to test their chambers.

Connect with the people who are designing the next generation of space ships.

NASA’s Exploring Space Through Algebra will help mathematics students (grades 8-12) develop a deeper understanding of key algebraic concepts and learn how to apply those concepts in the context of space exploration.


Live the challenges which the next generations of explorers will face as they learn to live on the moon and mars.  The Space Settlement Design Competition is a weekend three-day live-in industry simulation game for high school students, grades 10 - 12, held each spring at the Johnson Space Center. One hundred and sixty students from Texas and Iowa are divided into four teams to compete as members of simulated aerospace companies in the design of a large human base in orbit, or on the moon, or on Mars, in a scenario set 50 years or more in the future. Space science, engineering, communications and teamwork skills are taught.

The Orion spacecraft would have been launched into a low Earth orbit using the Ares I rocket (the "Stick"), developed by Alliant Techsystems, Rocketdyne, and Boeing.[15][16][17] Formerly referred to as the Crew Launch Vehicle (CLV), the Ares I consisted of a single Solid Rocket Booster (SRB) derived from the boosters used in the Space Shuttle system, connected at its upper end by an interstage support assembly to a new liquid-fueled second stage powered by an uprated Apollo-era J-2X rocket engine. NASA selected the Ares designs for their anticipated overall safety, reliability and cost-efficiency.[18] The launch of Ares I prototype, Ares I-X on October 28, 2009.
NASA began developing the Ares I low Earth orbit launch vehicle (analogous to Apollo's Saturn IB), returning to a development philosophy used for the original Saturn I, test-launching one stage at a time, which George Mueller abandoned in favor of "all-up" testing for the Saturn V. As of May 2010, the program got as far as launching the first Ares I-X first-stage flight on October 28, 2009 and testing the Orion launch abort system.

The Ares V design incorporated six RS-68 engines with assistance from a pair of 5.5-segment SRBs. Five Space Shuttle main engines (SSME) were originally planned for the Ares V, but the RS-68 engines are more powerful and less complex and therefore less expensive than the SSMEs. The Ares V would have flown for the first eight minutes of powered flight, then the Earth Departure Stage would have placed itself and the Altair spacecraft into low Earth orbit while awaiting the arrival of the Orion.