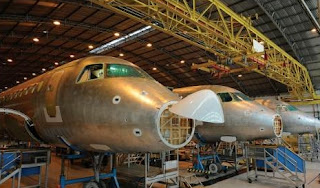 In the European Union, aerospace companies such as EADS, BAE Systems, Thales, Dassault, Saab AB and Finmeccanica account for a large share of the global aerospace industry and research effort, with the European Space Agency as one of the largest consumers of aerospace technology and products.

In Russia, large aerospace companies like Oboronprom and the United Aircraft Building Corporation (encompassing Mikoyan, Sukhoi, Ilyushin, Tupolev, Yakovlev, and Irkut which includes Beriev) are among the major global players in this industry.

In the United States, the Department of Defense and NASA are the two biggest consumers of aerospace technology and products. The Bureau of Labor Statistics of the United States reported that the aerospace industry employed 444,000 wage and salary jobs in 2004, many of which were in Washington and California. This is down from the peak years during the Reagan Administration when total employment exceeded 1,000,000 aerospace industry workers. During that period of recovery a special program to restore US competitiveness across all US industries, Project Socrates, contributed to employment growth as the U.S. aerospace industry captured 72 percent of the global aerospace market. By 1999 US share of the global market fell to 52 percent. Leading companies like Boeing, United Technologies Corporation and Lockheed Martin Corp. are among the most widely known aerospace manufacturers in the world.

Important locations of the civil aerospace industry worldwide include Seattle, Dayton, Ohio and St. Louis in the USA (Boeing), Montreal in Canada (Bombardier), Toulouse in France and Hamburg in Germany (both Airbus/EADS), the North-West of England and Bristol in the UK (BAE Systems, Airbus and AgustaWestland), as well as São José dos Campos in Brazil where Embraer is based. Komsomolsk-on-Amur and Irkutsk in Russia.

In the aerospaces & defense industry, a lot of consolidation has appeared over the last couple of decades. Between 1988 and 2010, worldwide more than 5'452 mergers & acquisitions with a total known value of 579 bil. USD have been announced. The largest transactions have been: the merger of Boeing with McDonnell valued at 13.4 bil. USD in 1996, Marconi Electronic Systems, a subsidiary of General Electric, was acquired by British Aerospace for 12.9 bil. USD in 1999 (now called: BAE Systems), and Raytheon acquired Hughes Aircraft for 9.5 bil. USD in 1997.