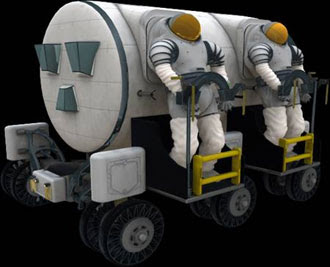 NASA's blueprints for an outpost on the moon are shaping up. The agency's Lunar Architecture Team has been hard at work, looking at concepts for habitation, rovers, and space suits. 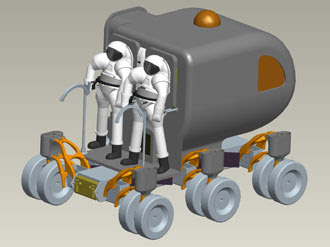 Image left: Concept of one potential design for a future lunar rover. Spacesuits would be attached to the exterior of the rover. Credit: NASA


NASA will return astronauts to the moon by 2020, using the Ares and Orion spacecraft already under development. Astronauts will set up a lunar outpost – possibly near a south pole site called Shackleton Crater – where they’ll conduct scientific research, as well as test technologies and techniques for possible exploration of Mars and other destinations.
Even though Shackleton Crater entices NASA scientists and engineers, they don’t want to limit their options. To provide for maximum flexibility, NASA is designing hardware that would work at any number of sites on the moon. Data from the Lunar Reconnaissance Orbiter mission, a moon-mapping mission set to launch in October 2008, might suggest that another lunar site would be best suited for the outpost.
First, astronauts on the moon will need someplace to live. NASA officials had been looking at having future moonwalkers bring smaller elements to the moon and assemble them on site. But the Lunar Architecture Team found that sending larger modules ahead of time on a cargo lander would help the outpost get up and running more quickly. The team is also discussing the possibility of a mobile habitat module that would allow one module of the outpost to relocate to other lunar destinations as mission needs dictate.
NASA is also considering small, pressurized rovers that could be key to productive operations on the moon’s surface. Engineers envision rovers that would travel in pairs – two astronauts in each rover – and could be driven nearly 125 miles away from the outpost to conduct science or other activities. If one rover had mechanical problems, the astronauts could ride home in the other. 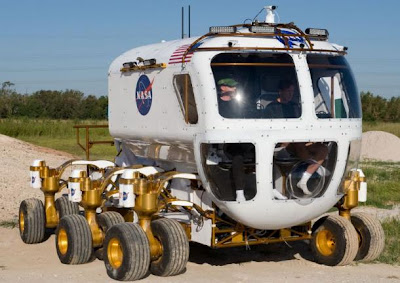 Image left: Concept of one potential design for a future lunar rover. Spacesuits would be attached to the exterior of the rover. Credit: NASA

Astronauts inside the rovers wouldn't need special clothing because the pressurized rovers would have what's called a "shirt-sleeve environment." Spacesuits would be attached to the exterior of the rover (see images). NASA's lunar architects are calling them "step in" spacesuits because astronauts could crawl directly from the rovers into the suits to begin a moonwalk.

NASA is also looking to industry for proposals for a next-generation spacesuit. The agency hopes to have a contractor on board by mid-2008.

NASA will spend the next several months communicating the work of the Lunar Architecture Team to potential partners -- the aerospace community, industry, and international space agencies -- to get valuable feedback that will help NASA further refine plans for the moon outpost. The agency's goal is to have finalized plans by 2012 to get "boots on the moon" by 2020.