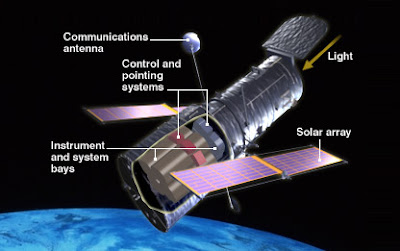 The Hubble Space Telescope (HST) is a telescope in orbit around the Earth, named after astronomer Edwin Hubble. Its position outside the Earth's atmosphere provides significant advantages over ground-based telescopes — images are not blurred by the atmosphere, there is no background from light scattered by the air, and the Hubble can observe ultra-violet light that is normally absorbed by the ozone layer in observations made from Earth. Since its launch in 1990, it has become one of the most important instruments in the history of astronomy. With it, astronomers have made many observations leading to breakthroughs in astrophysics. Hubble's Ultra Deep Field has the most detailed visible light image of the most distant objects ever taken.

From its conception in 1946 until its launch, the project to build a space telescope was beset by delays and budget problems. Soon after its 1990 launch, it was found that the main mirror suffered from spherical aberration due to faulty quality control during its manufacturing, which severely compromised the telescope's capabilities. However, after a servicing mission in 1993, the telescope was restored to its intended quality and became a vital research tool as well as a public relations boon for astronomy. The HST is part of NASA's Great Observatories series, with the Compton Gamma Ray Observatory, the Chandra X-ray Observatory, and the Spitzer Space Telescope.[2] Hubble is a collaboration between NASA and the European Space Agency.

The Hubble is the only telescope ever designed to be serviced in space by astronauts. To date, there have been four servicing missions, with a fifth and final mission planned for September 2008. Servicing Mission 1 took place in December 1993 when Hubble's imaging flaw was corrected. Servicing Mission 2 occurred in February 1997 when two new instruments were installed. Servicing Mission 3 was split into two distinct missions: SM3A occurred in December 1999 when urgently needed repairs were made to Hubble; and then SM3B followed in March 2002 when the Advanced Camera for Surveys (ACS) was installed.

Since SM3B, the Hubble has lost use of two major science instruments and is operating with viewing restrictions because of rate-sensing gyroscope failures. There are six gyroscopes onboard Hubble and three are normally used for observing. However, after further failures, and in order to conserve lifetime, a decision was taken in August 2005 to switch off one of the functioning gyroscopes and operate Hubble using only 2 gyros in combination with the Fine Guidance Sensors. This mode retains the excellent image quality of Hubble, and provides a redundancy should it be needed. Further redundancy is available now that an operational mode requiring only one gyro has been developed and tested. Six new gyroscopes are planned to be installed in SM4.

The two instruments that have failed are the Space Telescope Imaging Spectrograph (STIS) which stopped working in August 2004 and the Advanced Camera for Surveys (ACS) which ceased operations in January 2007 (operations were later restored for its little used far-ultraviolet mode). Currently (mid-2007) Hubble observations are being taken with the Wide Field and Planetary Camera 2 (WFPC2) and the Near Infrared Camera and Multi-Object Spectrometer (NICMOS). Astrometry is being carried out with the Fine Guidance Sensor (FGS). Without a reboost to increase the diameter of its orbit, drag will cause Hubble to re-enter the Earth's atmosphere sometime after 2010.

Following the 2003 Columbia Space Shuttle disaster, the fifth servicing mission (SM4), initially planned for 2004, was canceled on safety grounds. NASA determined that a manned mission would be too dangerous, due to a lack of access to the International Space Station (ISS), which can serve as a safe haven for an astronaut crew. The Shuttle cannot travel between the Hubble and ISS orbits. The organization later reconsidered this position, and, on October 31, 2006, NASA administrator Mike Griffin gave the green light for a final Hubble servicing mission to be flown by Atlantis. The mission is now planned for August 2008.[3][4] As a safety precaution, NASA will have the orbiter Endeavour standing by at Launch Complex 39B to provide rescue in the event of an emergency. The planned repairs to the Hubble will allow the telescope to function until at least 2013, when its successor, the James Webb Space Telescope (JWST), is due to be launched. The JWST will be far superior to Hubble for many astronomical research programs, but will only observe in infrared, so that it will not replace Hubble's ability to observe in the visible and ultraviolet parts of the spectrum.