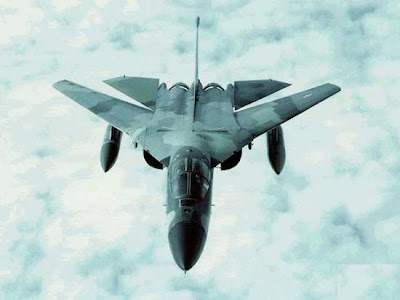 The F-111 was a multipurpose tactical fighter bomber capable of supersonic speeds. The aircraft was one of the more controversial aircraft ever to fly, yet it achieved one of the safest operational records of any aircraft in USAF history and became a highly effective all-weather interdiction aircraft. As a result of a poorly thought-out development specification, both the Navy and Air Force had become committed, much against their will, to a civilian-inspired "Tactical Fighter Experimental" (TFX) program. This called for developing a single aircraft-the F-111-to fulfill a Navy fleet-defense interceptor requirement and an Air Force supersonic strike aircraft requirement. In retrospect, this was impossible to achieve, especially since planners placed priority upon the Air Force requirement, and then tried to tailor this heavy landplane to the constraints of carrier-based naval operations.

The naval aircraft, the F-111B, was never placed in production. The Air Force aircraft, which was produced in a variety of models, including the F-111A, F-11D, F-11E, and F-11F, as well as an FB-111A strategic bomber version, had numerous problems, and only the F-111F actually fulfilled the original TFX design specification. This was less the fault of General Dynamics than of the civilian planners in the Pentagon whose "cost effective" inclinations ironically produced the major aeronautical fiasco of the 1960s-and a costly one at that.

The early F-111As had extremely bad engine problems, suffering from compressor surge and stalls. NASA pilots and engineers wrung out the airplane in an attempt to solve its problems, studying the engine inlet dynamics of the plane to determine the nature of inlet pressure fluctuations that led to compressor surge and stall. Eventually, as a result of NASA, Air Force, and General Dynamics studies, the engine problems were solved by a major inlet redesign.
The F-111 could operate from tree-top level to altitudes above 60,000 feet (18,200 meters). The F-111 had variable-sweep wings that allow the pilot to fly from slow approach speeds to supersonic velocity at sea level and more than twice the speed of sound at higher altitudes. Wings angle from 16 degrees (full forward) to 72.5 degrees (full aft). Full-forward wings gave the most surface area and maximum lift for short takeoff and landing. The F-111 needed no drag chute or reserve thrust to slow down after landing.
The two crew members sat side-by-side in an air-conditioned, pressurized cockpit module that served as an emergency escape vehicle and as a survival shelter on land or water. In emergencies, both crew members remained in the cockpit and an explosive cutting cord separated the cockpit module from the aircraft. The module descended by parachute. The ejected module included a small portion of the wing fairing to stabilize it during aircraft separation. Airbags cushioned impact and help keep the module afloat in water. The module could be released at any speed or altitude, even under water. For underwater escape, the airbags raised the module to the surface after it has been severed from the plane.
The aircraft's wings and much of the fuselage behind the crew module contained fuel tanks. Using internal fuel only, the plane had a range of more than 2,500 nautical miles (4,000 kilometers). External fuel tanks could be carried on the pylons under the wings and jettisoned if necessary.
The F-111 could carry conventional as well as nuclear weapons. It could carry up to two bombs or additional fuel in the internal weapons bay. External ordnance included combinations of bombs, missiles and fuel tanks. The loads nearest the fuselage on each side pivoted as the wings swept back, keeping ordnance parallel to the fuselage. Outer pylons did not move but could be jettisoned for high-speed flight.
The avionics systems included communications, navigation, terrain following, target acquisition and attack, and suppression of enemy air defense systems. A radar bombing system was used for precise delivery of weapons on targets during night or bad weather.
The F-111's automatic terrain-following radar system flew the craft at a constant altitude following the Earth's contours. It allowed the aircraft to fly in valleys and over mountains, day or night, regardless of weather conditions. Should any of the system's circuits fail, the aircraft automatically initiated a climb.

The F-111A first flew in December 1964. The first operational aircraft was delivered in October 1967 to Nellis Air Force Base, Nev. A models were used for tactical bombing in Southeast Asia.
Developed for the U.S. Navy, the F-111B was canceled before its production. F-111C's are flown by the Royal Australian Air Force.
The F-111D has improved avionics with better navigation, air-to-air weapon delivery systems, and newer turbofan engines. The F-111D's were flown by the 27th Fighter Wing, Cannon Air Force Base, N.M.
The F-111E model had modified air intakes to improve the engine's performance at speeds above Mach 2.2. Most F-111Es served with the 20th Fighter Wing, Royal Air Force Station Upper Heyford, England, to support NATO. F-111E's were deployed to Incirlik Air Base, Turkey, and were used in Operation Desert Storm. In the early morning of Jan. 17, 1991, the F-111 went into combat again in the initial bombing raids of Operation Desert Storm. More than 100 F-111 aircraft of different versions joined the first strikes against Iraq both as bombers and radar jammers.


The F-111F had improved turbofan engines give F-111F models 35 percent more thrust than previous F-111A and E engines. The avionics systems of the F model combine features of the F-111D and E. The last F model was delivered to the Air Force in November 1976. The F models were modified to carry the Pave Tack system in their weapons bays. This system provides an improved capability to acquire, track and designate ground targets at night for delivery of laser, infrared and electro-optically guided weapons. The F-111F was proven in combat over Libya in 1986 and again over Iraq in 1991. Although F-111F's flew primarily at night during Operation Desert Storm, aircrews flew a particularly notable daytime mission using the Guided Bomb Unit (GBU-15) to seal the oil pipeline manifold sabotaged by Iraq, allowing the oil to flow into the Persian Gulf.
As a result of the Air Force decision to retire the F-111 weapon system, the 27th Fighter Wing's 74 F-111E/F aircraft began retiring in late 1995 and were replaced with 54 F-16C/D aircraft. All F-111s in the Air Force inventory have been retired to the Aerospace Maintenance and Regeneration Center at Davis-Monthan AFB, Ariz. The center, popularly know as the boneyard, was home to all the remaining F-111E and F models by October 1996.

Seventy-six were built as FB-111s and saw service with the Strategic Air Command until 1990 when they were converted to F-111Gs and assigned to Tactical Air Command. The F-111G was assigned to the 27th Fighter Wing at Cannon Air Force Base and was used in a training role only. The conversion made minor avionics updates and strengthened the aircraft to allow its use in a more dynamic role as a fighter aircraft.

Development of the EF-111A Raven began in January 1975 when the Air Force contracted with Grumman Aerospace to modify two F-111As to serve as electronic warfare platforms. The F-111”s high speed, long range, substantial payload and reasonable cost made it the ideal candidate to protect allied tactical forces against enemy radar defenses.
When converting the aircraft to its new electronic warfare role, the primary modification was the ALQ-99 jamming system, N/ALQ-137 self-protection system, and an AN/ALR-62 terminal threat warning system. To accommodate the 6,000 pounds of new electronics, Grumman added a narrow, 16-foot long canoe-shaped radome under the fuselage and a din-tip pod mounted on top of the vertical stabilizer.
Grumman’s EF-111A prototypes staged their first flights in 1977. After two years of testing the Air Force gave the contractor the go-ahead to convert 42 F-111As into the EF-111 configuration. The modifications cost approximately $25 million per aircraft, and the total cost of the program was $1.5 billion. The first production EF-111 was delivered to the 388th Tactical Electronic Squadron at Mountain Home AFB, Idaho, in November 1981 and the aircraft became fully operational in 1983.
The Avionics Modernization Program (AMP) included the installation of 10 new subsystems including a doppler radar and internal navigation system. The modification, installed in all 42 EF-111s, was completed in 1994. Prompted by a series of crashes attributable to the failure of the F-111’s original analog flight control system, the installation of Digital Flight Control System begann in 1990 and was completed in 1997.
The last squadron of EF-111s remaining in service, at Cannon AFB, NM, peformed the Suppression of Enemy Air Defense [SEAD] mission. DOD decided to retire the EF-111A jammer and replace it with a new Air Force system, the high speed anti-radiation missile (HARM) targeting system on the F-16C, and the existing Navy electronic warfare aircraft, the EA-6B. Recognizing that too few EA-6B aircraft may be available to meet both Air Force and Navy needs, DOD retained these 12 EF-111s in the active inventory through 1998, when additional upgraded EA-6Bs became available.