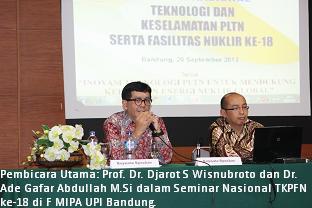 Dominating the Skies. Overwhelming the Threat.

It was described by Tom Burbage, former F-22 program head at Lockheed Martin, as "the most technically complex piece of equipment on the aircraft." It has a greater range (250+ nmi) than the radar, allowing the F-22 to limit its own radar emissions to maximise stealth. As a target approaches, the receiver can cue the AN/APG-77 radar to track the target with a narrow beam, which can be as focused down to 2° by 2° in azimuth and elevation.

The AN/APG-77 radar, designed for air superiority and strike operations, features a low-observable, active-aperture, electronically-scanned array that can track multiple targets in any weather. The AN/APG-77 changes frequencies more than 1,000 times per second to lower interception probability. Additionally, radar emissions can be focused in an electronic-attack capability to overload enemy sensors. 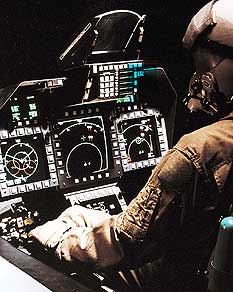 The radar's information is processed by two Raytheon Common Integrated Processor (CIP)s. Each CIP can process 10.5 billion instructions per second and has 300 megabytes of memory. Information can be gathered from the radar and other onboard and offboard systems, filtered by the CIP, and offered in easy-to-digest ways on several cockpit displays, enabling the pilot to remain on top of complicated situations. The F-22's avionics software has some 1.7 million lines of code, the majority involving processing data from the radar.

The radar has an estimated range of 125–150 miles, though planned upgrades will allow a range of 250 miles (400 km) or more in narrow beams.In 2007, tests by Northrop Grumman, Lockheed Martin, and L-3 Communications enabled the AESA system of a Raptor to act like a WiFi access point, able to transmit data at 548 megabits per second and receive at gigabit speed; this is far faster than the Link 16 system used by U.S. and allied aircraft, which transfers data at just over 1 Mbit/s.

The F-22 has a threat detection and identification capability comparative with the RC-135 Rivet Joint.The F-22's stealth allows it to safely operate far closer to the battlefield, compensating for the reduced capability. The F-22 is capable of functioning as a "mini-AWACS", however the radar is less powerful than dedicated platforms such as the E-3 Sentry.

The F-22 allows its pilot to designate targets for cooperating F-15s and F-16s, and determine whether two friendly aircraft are targeting the same aircraft. This radar system can sometimes identify targets "many times quicker than the AWACS". The radar is capable of high-bandwidth data transmission; conventional radio "chatter" can be reduced via these alternative means.The IEEE-1394B data bus developed for the F-22 was derived from the commercial IEEE-1394 "FireWire" bus system. Sensor fusion combines data from all onboard and offboard sensors into a common view to prevent the pilot from being overwhelmed.

In a critical article former Navy Secretary John Lehman wrote "[a]t least [the F-22s] are safe from cyberattack. No one in China knows how to program the '83 vintage IBM software that runs them." Former Secretary of the USAF Michael Wynne blamed the use of the DoD's Ada as a reason for cost overruns and schedule slippages on many major military projects, including the F-22 Raptor.

The F-22 uses the INTEGRITY-178B operating system from Green Hills Software, which is also used on the F-35, several commercial airliners and the Orion Crew Exploration Vehicle. However cyberattacks on Lockheed Martin's subcontractors have raised doubts about the security of the F-22's systems and its usefulness in combat as a result.


Herbert J. Carlisle has said that the F-22 can datalink with the Tomahawk (missile).

The engine used on the F-35 is the Pratt & Whitney F135. An alternative engine, the General Electric/Rolls-Royce F136, was under development until December 2011 when the manufacturers canceled the project.

Neither the F135 or F136 engines are designed to supercruise in the F-35, however the F-35 can achieve a limited supercruise of Mach 1.2 for 150 miles. The F135 is the second (radar) stealthy afterburning jet engine and, like the Pratt & Whitney F119 from which it was derived, has suffered from pressure pulsations in the afterburner at low altitude and high speed or "screech" during development. Turbine bearing health will be monitored with thermoelectric-powered sensors.

The F-35 has a maximum speed of over Mach 1.6. With a maximum takeoff weight of 60,000 lb (27,000 kg), the Lightning II is considerably heavier than the lightweight fighters it replaces. In empty and maximum gross weights, it more closely resembles the single-seat, single-engine Republic F-105 Thunderchief, which was the largest single-engine fighter of the Vietnam war era. The F-35's modern engine delivers over 60 percent more thrust in an aircraft of the same weight so that in thrust to weight and wing loading it is much closer to a comparably equipped F-16.

The STOVL F-35B is outfitted with the Rolls-Royce LiftSystem, designed by Lockheed Martin and developed by Rolls-Royce. This system more resembles the Russian Yak-141 and German VJ 101D/E than the preceding STOVL Harrier Jump Jet and the Rolls-Royce Pegasus engine. The Lift System is composed of a lift fan, drive shaft, two roll posts and a "Three Bearing Swivel Module" (3BSM).

The 3BSM is a thrust vectoring nozzle which allows the main engine exhaust to be deflected downward at the tail of the aircraft. The lift fan is near the front of the aircraft and provides a counterbalancing thrust using two counter-rotating blisks.

It is powered by the engine's low-pressure (LP) turbine via a drive shaft and gearbox. Roll control during slow flight is achieved by diverting unheated engine bypass air through wing-mounted thrust nozzles called Roll Posts. 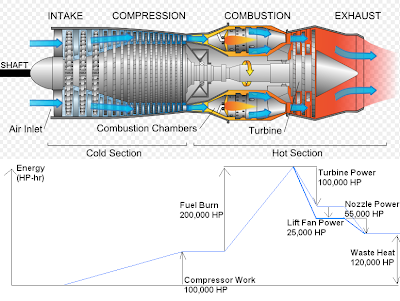 Diagram of turbojet energy for LiftSystem

F136 funding came at the expense of other parts of the program, impacting on unit costs. The F136 team has claimed that their engine has a greater temperature margin which may prove critical for VTOL operations in hot, high altitude conditions.

Pratt & Whitney has tested higher thrust versions of the F135, partly in response to GE's claims that the F136 is capable of producing more thrust than the 43,000 lbf (190 kN) of early F135s. The F135 has demonstrated a maximum thrust of over 50,000 lbf (220 kN) during testing; making it the most powerful engine ever installed in a fighter aircraft as of 2010. 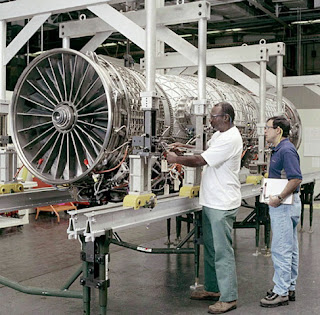