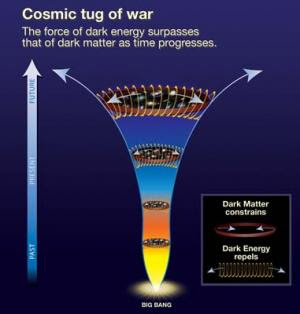 By;
Arip Nurahman
Department of Physics
Faculty of Sciences and Mathematics
Indonesia University of Education


Dark Energy: Astronomers Still 'Clueless' About Mystery Force Pushing Galaxies Apart By Andrew Chaikin It sounds like something out of a Star Trek episode: Dark energy, a mysterious force that no one understands, is causing the universe to fly apart faster and faster. Only a few years ago, if you'd suggested something like that to astronomers, they would have told you to spend less time in front of the TV and more time in the "real" world.

But dark energy is real or at least, a growing number of astronomers think it is. No one, however, can truly explain it.
"Frankly, we just don’t understand it," says Craig Hogan, an astronomer at the University of Washington at Seattle. "We know what its effects are," Hogan says, but as to the details of dark energy, "Were completely clueless about that. And everybody’s clueless about it."

Dark energy entered the astronomical scene in 1998, after two groups of astronomers made a survey of exploding stars, or supernovas, in a number of distant galaxies. These researchers found that the supernovas were dimmer than they should have been, and that meant they were farther away than they should have been. The only way for that to happen, the astronomers realized, was if the expansion of the universe had sped up at some time in the past.

The Images This chart shows how much of the universe is made up of dark energy, dark matter, and ordinary matter. This diagram reveals changes in the rate of expansion since the universe's birth 15 billion years ago. The more shallow the curve, the faster the rate of expansion. The curve changes noticeably about 7.5 billion years ago, when objects in the universe beg Related SPACE.com STORIES Astrophysics Challenged By Dark Energy Finding Farthest Supernova Detected, 'Dark Energy' Suspected 'Groundbreaking' Discovery: First Direct Observation of Dark Matter Understanding Dark Matter and Light Energy TODAY'S DISCUSSION What do you think of this story?

Until then, astronomers had generally believed that the cosmic expansion was gradually slowing down, due to the gravitational tugs that individual galaxies exert on one another. But the supernova results implied that some mysterious force was acting against the pull of gravity, causing galaxies to fly away from each other at ever greater speeds.

It was a stunning realization.
At first, other researchers questioned the result; perhaps the supernovas were dimmer because their light was being blocked by clouds of interstellar dust. Or maybe the supernovas themselves were intrinsically dimmer than scientists thought. But with careful checking, and more data, those explanations have largely been put aside, and the dark energy hypothesis has held up.

In one sense, the idea is not completely new. Einstein had included such an "anti-gravity" effect in his theory of general relativity, in his so-called cosmological constant. But Einstein himself, and later many other astronomers, came to regard this as a kind of mathematical contrivance that had little relationship to the real universe. By the 1990s no one expected that the effect would turn out to be real.

Still, anti-gravity isn’t the right way to describe dark energy, says Virginia Trimble of the University of Southern California at Irvine.
"It doesn’t act opposite to gravity," Trimble says. "It does exactly what general relativity says it should do, if it has negative pressure."
Trimble has a fairly simple way of imagining the phenomenon.
"If you think in terms of the universe as a very large balloon," she says, "when the balloon expands, that makes the local density of the [dark energy] smaller, and so the balloon expands some more . because it exerts negative pressure. While its inside the balloon its trying to pull the balloon back together again, and the lower the density of it there is, the less it can pull back, and the more it expands. This is what happens in the expanding universe."

The supernova evidence suggests that the acceleration kicked in about 5 billion years ago. At that time, galaxies were far enough apart that their gravity (which weakens with distance) was overwhelmed by the relatively gentle but constant repulsive force of dark energy. Since then, dark energy's continuing push has been causing the cosmic expansion to speed up, and it seems likely now that this expansion will continue indefinitely.

"It means that if you look out at the universe today, and if we wait many billions of years," says Hogan, "everything will be flying away faster and faster, and eventually well be left quite alone."
Aside from such grim forecasts, dark energy is causing quite a bit of upset for astronomers who have to adjust to an unexpected and outlandish new view of the universe. Already, they have had to accept the notion of dark matter, which is now thought to far outnumber ordinary matter in the universe, but which has never been detected in any laboratory. Now, the arrival of an unknown force that rules cosmic expansion has added insult to injury.

"I'm as big a fan of dark matter and dark energy as anybody else," says astronomer Richard Ellis of Caltech. But, he adds, "I find it very worrying that you have a universe where there are three constituents, of which only one [i.e., ordinary matter] is really physically understood."
"When you teach undergraduates, and they say, 'Well, what is dark matter?' Well, nobody's really sure. 'What is dark energy?' We're even less sure. So you have to explain to a student, that 90 percent of the universe, 95 percent, is in two ingredients that nobody really understands," says Ellis. "This isn't really progress."

No one argues that dark energy is difficult to comprehend. And as Trimble points out, it is hardly the first strange idea scientists have had to accept.
"It took two generations for people to be comfortable with quantum mechanics," she says. "The fact that you do not have good intuition about [dark energy] is true for quantum mechanics, general relativity, and lots of other things, because we cant easily mock them up in the laboratory."
And for cosmologists, dark energy has solved at least one cosmological conundrum raised by studies of the Cosmic Microwave Background, or CMB.