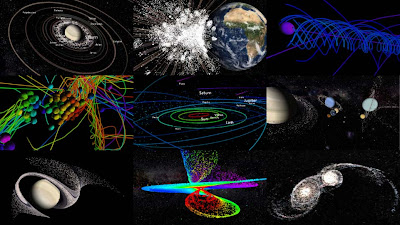 The universe is the totality of existence, including planets, stars, galaxies, the contents of intergalactic space, and all matter and energy. Definitions and usage vary and similar terms include the cosmos, the world and nature. Scientific observation of earlier stages in the development of the universe, which can be seen at great distances, suggests that the universe has been governed by the same physical laws and constants throughout most of its extent and history. The universe is believed to be at least 93 billion light years in diameter and has existed for about 13.7 billion years, since it was created by the Big Bang.

There are various multiverse hypotheses, in which physicists have suggested that the universe might be one among many universes that likewise exist. The farthest distance that it is theoretically possible for humans to see is described as the observable universe. Observations have shown that the universe appears to be expanding at an accelerating rate, and a number of models have arisen to predict its ultimate fate.

Throughout recorded history, several cosmologies and cosmogonies have been proposed to account for observations of the universe. The earliest quantitative geocentric models were developed by the ancient Greek philosophers. Over the centuries, more precise observations and improved theories of gravity led to Copernicus's heliocentric model and the Newtonian model of the Solar System, respectively. Further improvements in astronomy led to the realization that the Solar System is embedded in a galaxy composed of billions of stars, the Milky Way, and that other galaxies exist outside it, as far as astronomical instruments can reach. Careful studies of the distribution of these galaxies and their spectral lines have led to much of modern cosmology. Discovery of the red shift and cosmic microwave background radiation revealed that the universe is expanding and apparently had a beginning.

History of the universe

According to the prevailing scientific model of the universe, known as the Big Bang, the universe expanded from an extremely hot, dense phase called the Planck epoch, in which all the matter and energy of the observable universe was concentrated. Since the Planck epoch, the universe has been expanding to its present form, possibly with a brief period (less than 10−32 seconds) of cosmic inflation. Several independent experimental measurements support this theoretical expansion and, more generally, the Big Bang theory. Recent observations indicate that this expansion is accelerating because of dark energy, and that most of the matter in the universe may be in a form which cannot be detected by present instruments, called dark matter. The common use of the "dark matter" and "dark energy" placeholder names for the unknown entities purported to account for about 95% of the mass-energy density of the universe demonstrates the present observational and conceptual shortcomings and uncertainties concerning the nature and ultimate fate of the universe.


Current interpretations of astronomical observations indicate that the age of the universe is 13.75 ± 0.17 billion years,(whereas the decoupling of light and matter, see CMBR, happened already 380,000 years after the Big Bang), and that the diameter of the observable universe is at least 93 billion light years or 8.80×1026 metres. According to general relativity, space can expand faster than the speed of light, although we can view only a small portion of the universe due to the limitation imposed by light speed. Since we cannot observe space beyond the limitations of light (or any electromagnetic radiation), it is uncertain whether the size of the universe is finite or infinite.