"Mars is there, waiting to be reached."
*Buzz Aldrin* 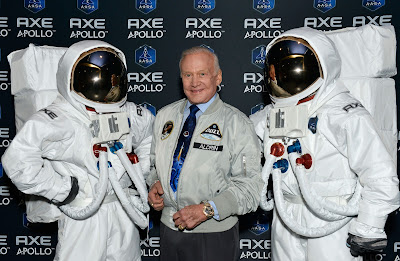 
Buzz Aldrin graduated third in his class at West Point in 1951, with a bachelor of science degree in mechanical engineering. He was commissioned as a Second Lieutenant in the U.S. Air Force and served as a jet fighter pilot during the Korean War. He flew 66 combat missions in F-86 Sabres and shot down two Mikoyan-Gurevich MiG-15 aircraft. The June 8, 1953, issue of Life magazine featured gun camera photos taken by Aldrin of one of the Russian pilots ejecting from his damaged aircraft.

Subsequent to the war, Aldrin was assigned as an aerial gunnery instructor at Nellis Air Force Base in Nevada, and next was an aide to the dean of faculty at the United States Air Force Academy, which had recently begun operations in 1955.

He flew F-100 Super Sabres as a flight commander at Bitburg Air Base, Germany, in the 22d Fighter Squadron. In 1963 Aldrin earned a doctor of science degree in astronautics from Massachusetts Institute of Technology. His graduate thesis was "Line-of-sight guidance techniques for manned orbital rendezvous", the dedication of which read, "In the hopes that this work may in some way contribute to their exploration of space, this is dedicated to the crew members of this country’s present and future manned space programs.

If only I could join them in their exciting endeavors!" On completion of his doctorate, he was assigned to the Gemini Target Office of the Air Force Space Systems Division in Los Angeles before his selection as an astronaut. His initial application to join the astronaut corps was rejected on the basis of having never been a test pilot; that prerequisite was lifted when he re-applied and was accepted into the third astronaut class. 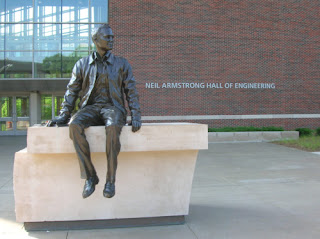 Aldrin was selected as part of the third group of NASA astronauts selected in October 1963. Because test pilot experience was no longer a requirement, this was the first selection for which he was eligible. After the deaths of the original Gemini 9 prime crew, Elliot See and Charles Bassett, Aldrin and Jim Lovell were promoted to back-up crew for the mission.

The main objective of the revised mission (Gemini 9A) was to rendezvous and dock with a target vehicle, but when this failed, Aldrin improvised an effective exercise for the craft to rendezvous with a coordinate in space. He was confirmed as pilot on Gemini 12, the last Gemini mission and the last chance to prove methods for extra-vehicular activity (EVA). Aldrin set a record for EVA, demonstrating that astronauts could work outside spacecraft.
On July 21, 1969, he became the second astronaut to walk on the Moon, keeping his record total EVA time until that was surpassed on Apollo 14. There has been much speculation about Aldrin's desire at the time to be the first astronaut to walk on the Moon.

According to different NASA accounts, he had originally been proposed as the first to step onto the Moon's surface, but due to the physical positioning of the astronauts inside the compact lunar landing module, it was easier for the commander, Neil Armstrong, to be the first to exit the spacecraft. 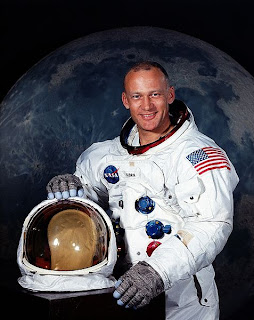 "There's a need for accepting responsibility for a person's life and making choices that are not just ones for immediate short-term comfort.
You need to make an investment, and the investment is in health and education."
*Buzz Aldrin*