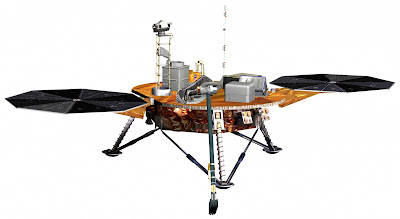 Mission
Launched in August 2007, the Phoenix Mars Mission is the first in NASA's Scout Program. Phoenix is designed to study the history of water and habitability potential in the Martian arctic's ice-rich soil.
An introduction to what we know and hope to discover about Mars. Choose a chapter:
I. Overview
II. Polar Regions
III. Habitability & Biology
IV. Water on Mars
V. Climate Change 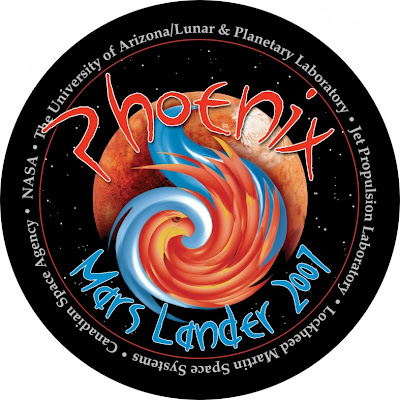 This portion of the website has been designed with content by kids and for kids. The pages feature music, artwork and projects by kids involved or interested in the mission.
Just for Kids

Spacecraft visiting Mars have returned intriguing images of the surface of the Red Planet for over forty years. Many of these images suggest liquid water once flowed on the surface of Mars. The ViewSpace program "Mars: The Search for Water, the Search for Life" looks at some of these images and compares them to similar features found on the Earth and addresses possible consequences of finding liquid water on Mars. 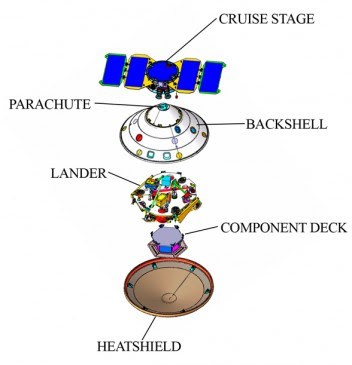 NASA's Phoenix Mars Lander, launched on Aug. 4 and headed to Mars, fired its four trajectory correction thrusters Wednesday for only the second time. The 45.9-second burn nudged the spacecraft just the right amount to put it on a course to arrive at the red planet seven months from today.
At Mars, Phoenix will face a challenging 7-minute descent through the atmosphere to land in the far north on May 25, 2008. After landing, it will use a robotic digging arm and other instruments during a three-month period to investigate whether icy soil of the Martian arctic could have ever been a favorable environment for microbial life. The solar-powered lander will also look for clues about the history of the water in the ice and will monitor weather as northern Mars' summer progresses toward fall. 
The second course adjustment had been postponed a week to allow time for carefully returning the spacecraft to full operations after a cosmic-ray strike disrupted a computer memory chip Oct. 6. Experiences with previous spacecraft have shown hits by cosmic rays are a known hazard in deep space. The Phoenix spacecraft properly followed its onboard safety programming by putting itself into a precautionary standby state when the event occurred. Mission controllers then followed step-by-step procedures to understand the cause and resume regular operations.
"Our engineers responded in a very careful and deliberate manner. Since this was a very well-understood anomaly, it was a good experience for the team," said Phoenix Project Manager Barry Goldstein of NASA's Jet Propulsion Laboratory, Pasadena, Calif.
This week's trajectory correction maneuver, plus the flight's first one on Aug. 10, were planned in advance to adjust for a launch-day course that was intentionally designed to be slightly offset from Mars. The offset had prevented the possibility of the third stage of the launch vehicle hitting Mars.
Before the Oct. 24 maneuver, the spacecraft's planned trajectory would have missed Mars by about 95,000 kilometers (59,000 miles). Now, Phoenix is on track to intercept Mars in its orbit next year.
"The first and second trajectory correct maneuvers were designed together," said JPL's Brian Portock, chief of the navigation team for Phoenix. "We gain a more efficient use of fuel by splitting the necessary adjustment into two maneuvers." The second maneuver changed the velocity of the spacecraft by about 3.6 meters per second (8.05 miles per hour), about one-fifth as much as the first maneuver.
Four additional opportunities for trajectory corrections are scheduled in April and May 2008. "The remaining ones are really for fine tuning," Portock said. The landing site is a broad valley at about 68 degrees north latitude, 233 degrees east longitude.
Initial in-flight checks of all the science instruments were completed with Oct. 26 testing of the Canadian-provided weather station, which includes a laser-reflection device called a lidar. "With the activation of Canada's weather station, the testing of the precision lidar instrument and the temperature and pressure sensors, we will be receiving our first space weather report from Phoenix as it continues its voyage to Mars," said Alain Berinstain, Director of Planetary Exploration and Space Astronomy at the Canadian Space Agency.
In recent weeks, flight controllers have conducted two sessions of heating the spacecraft's Thermal and Evolved-Gas Analyzer to drive off water vapor that was carried from Earth in the instrument. Results indicate that the process is successfully removing water vapor. Additional "bake-out" sessions for this instrument are planned prior to landing.
The Phoenix mission is led by Peter Smith of the University of Arizona, Tucson, with project management at JPL and development partnership at Lockheed Martin, Denver. International contributions are provided by the Canadian Space Agency; the University of Neuchatel, Switzerland; the universities of Copenhagen and Aarhus, Denmark; the Max Planck Institute, Germany; and the Finnish Meteorological Institute. JPL is a division of the California Institute of Technology in Pasadena.
Additional information on Phoenix is available online at: http://www.nasa.gov/phoenix and at http://phoenix.lpl.arizona.edu . Additional information on NASA's Mars program is available online at: http://www.nasa.gov/mars. 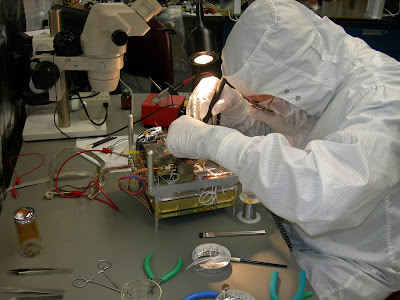