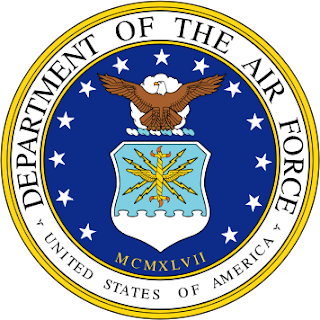 The United States Air Force (USAF) is the aerial warfare branch of the armed forces and one of the seven uniformed services of the United States. Initially born as the United States Army Air Corps, the USAF was formed as a separate branch of the military on September 18, 1947.[2] It was the last branch of the U.S. military to be formed.
The USAF is the largest and most technologically advanced air force in the world, with about 5778 manned aircraft in service (4,093 USAF; 1,289 Air National Guard; and 396 Air Force Reserve);[3] approximately 156 Unmanned Combat Air Vehicles, 2130 Air-Launched Cruise Missiles,[4] and 450 Intercontinental Ballistic Missiles. The USAF has 328,439 personnel on active duty, 74,000 in the Selected and Individual Ready Reserves, and 106,000 in the Air National Guard. In addition, the Air Force employs 168,900 civilian personnel including indirect hire of foreign nationals.[5]
In 2007, the USAF implemented a large Reduction-in-Force (RIF). Because of budget constraints, the USAF will reduce the service's current size from 333,000 active duty personnel, to 316,000, which will be the smallest since the attack on Pearl Harbor, according to former Air Force Chief of Staff General Michael Moseley.[6] The current size of the active-duty force is roughly 70% of that of the USAF at the end of the first Gulf War in 1991.[7]
Not all of the United States' military combat aircraft are operated by the USAF. The Army operates its own helicopters, mostly for support of ground combatants; it as well maintains a small fleet of fixed wing aircraft (mostly Unmanned Aerial Vehicles). The Navy is responsible for a multitude of aircraft, including integrated air wing combat aircraft operating aboard its 11 aircraft carriers and also many maritime patrol and transport aircraft stationed at multiple Naval air stations around the world. The Marine Corps operates its own combat and transport aircraft in support of its ground mission and often in conjunction with Naval Aviation. The Coast Guard also maintains transport and search-and-rescue aircraft (SARA), which may be used in a combat and law enforcement role. All branches of the U.S. military operate helicopters.
The Department of the Air Force is headed by the civilian Secretary of the Air Force who heads administrative affairs. The Department of the Air Force is a division of the Department of Defense, headed by the Secretary of Defense. The highest ranking military officer in the Department of the Air Force is the Chief of Staff of the Air Force.
On 5 June 2008, in a move called "unprecedented" by one Air Force-related journal, Secretary of Defense Robert M. Gates, accepted the resignations of both the Secretary of the Air Force, Michael W. Wynne, and the Chief of Staff of the United States Air Force, Gen. T. Michael Moseley, in effect firing both men for "systemic issues associated with declining Air Force nuclear mission focus and performance". The forced resignations followed an investigation ordered by Gates into two embarrassing incidents involving nuclear weapons, and were also the culmination of a long-running series of disputes between the Air Force leadership and Gates.[8]