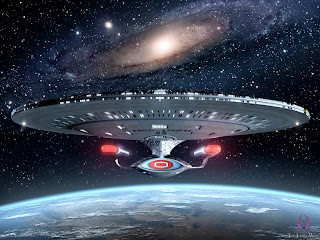 "Today's science fiction is often tomorrow's science fact. The physics that underlies Star Trek is surely worth investigating. To confine our attention to terrestrial matters would be to limit the human spirit."

The Physics of Star Trek is a 1995 nonfiction book by Arizona State University professor Lawrence M. Krauss. It discusses the physics involved in various concepts and objects described in the Star Trek universe. He investigates the possibility of such things as inertial dampeners and warp drive, and whether physics as we know it would allow such inventions. He also discusses time travel, light speed, pure energy beings, wormholes, and other concepts. The book includes a foreword by astrophysicist Stephen Hawking.
The Physics of Star Trek was met with generally positive reviews. It became a national bestseller and sold more than 200,000 copies in the United States. As of 1998, it was being translated into 13 different languages. It was also the basis of a BBC television production.
Krauss got the idea for writing the book from his publisher, who initially suggested it as a joke. Krauss dismissed the idea but later thought that using Star Trek might get people interested in real physics.
The hardcover edition was published in November 1995, and a paperback edition followed in September 1996. Krauss's next book, Beyond Star Trek: Physics from Alien Invasions to the End of Time, was published in 1997.