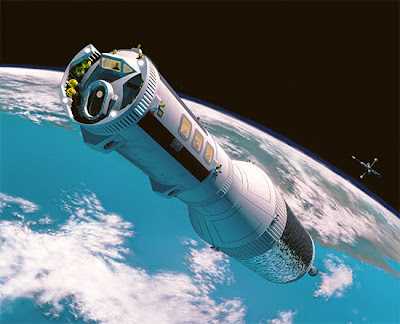 This EOE article is adapted from an information paper published by the World Nuclear Association (WNA). WNA information papers are frequently updated, so for greater detail or more up to date numbers, please see the latest version on WNA website (link at end of article).

Heatpipe Power System (HPS) reactors are compact fast reactors producing up to 100 kWe for about ten years to power a spacecraft or planetary surface vehicle. They have been developed since 1994 at the Los Alamos National Laboratory in New Mexico as a robust and low technical-risk system with an emphasis on high reliability and safety. They employ heatpipes to transfer energy from the reactor core to make electricity using Stirling cycle or Brayton cycle converters.

Energy from fission is conducted from the fuel pins to the heatpipes filled with sodium vapor that carry it to the heat exchangers and then in hot gas to the power conversion systems to make electricity. The gas is 72% helium and 28% xenon.


The reactor itself contains a number of heatpipe modules with the fuel. Each module has its central heatpipe with rhenium-clad fuel sleeves arranged around it. They are the same diameter and contain 97% enriched uranium nitride fuel, all within the cladding of the module. The modules form a compact hexagonal core.

Control is obtained by six stainless steel-clad beryllium drums, each 11 or 13 cm diameter, with boron carbide forming a 120 degree arc on each. The drums fit within the six sections of the beryllium radial neutron reflector surrounding the core, and rotate to effect control, moving the boron carbide in or out. Shielding is dependent on the mission or application, but lithium hydride in stainless steel cans is the main form of neutron shielding.

The SAFE-400 space fission reactor (Safe Affordable Fission Engine) is a 400 kWt HPS producing 100 kWe to power a space vehicle using two Brayton power systems—gas turbines driven directly by the hot gas from the reactor. Heat exchanger outlet temperature is 880°C. The reactor has 127 identical heatpipe modules made of molybdenum, or niobium with 1% zirconium. Each has three fuel pins 1 cm diameter, nesting together into a compact hexagonal core 25 cm across. The fuel pins are 70 cm long (fuelled length 56 cm), the total heatpipe length is 145 cm, extending 75 cm above the core, where they are coupled with the heat exchangers. The core with reflector has a 51 cm diameter. The mass of the core is about 512 kg and each heat exchanger is 72 kg. SAFE has also been tested with an electric ion drive.

A smaller version of this kind of reactor is the HOMER-15—the Heatpipe-Operated Mars Exploration Reactor. It is a15 kW thermal unit similar to the larger SAFE model, and stands 2.4 meters tall including the heat exchanger and 3 kWe Stirling engine (see above). It operates at only 600°C and is therefore able to use stainless steel for fuel pins and heatpipes, which are 1.6 cm diameter. It has 19 sodium heatpipe modules with 102 fuel pins bonded to them, 4 or 6 per pipe, that hold a total of 72 kg of fuel. The heatpipes are 106 cm long and fuel height 36 cm. The core is hexagonal (18 cm across) with six beryllium oxide (BeO) pins in the corners. Total mass of reactor system is 214 kg, and diameter is 41 cm.

In the 1980s, the French ERATO program considered three 20 kWe turboelectric power systems for space operation. All used a Brayton cycle converter with a helium-xenon mix as working fluid. The first system was a sodium-cooled uranium dioxide-fuelled fast reactor operating at 670°C, the second a high-temperature gas-cooled reactor (thermal or epithermal neutron spectrum) working at 840°C, and the third a lithium-cooled uranium nitride-fuelled fast reactor working at 1150°C.

In 2002, the U.S. National Aeronautics and Space Administration (NASA) announced its Nuclear Systems Initiative for space projects, and in 2003 this was renamed Project Prometheus and given increased funding. Its purpose is to enable a major step change in the capability of space missions. Nuclear-powered space travel will be much faster than is now possible, and will enable manned missions to Mars.

One part of Prometheus, a NASA project with substantial involvement by the U.S. Department of Energy (DOE), is to develop the Multi-Mission Thermoelectric Generator and the Stirling Radioisotope Generator described in the RTG section above.


A more radical objective of Prometheus is to produce a space fission reactor system such as those described above for both power and propulsion that is safe to launch and will operate for many years. This will have much greater power than RTGs. Power of 100 kW is envisaged for a nuclear electric propulsion system driven by plasma.

The fiscal year 2004 budget proposal was US$279 million, with $3 billion to be spent over five years. This consists of $186 million ($1 billion over 5 years) building on last year's allocation, plus $93 million ($2 billion over five years) towards a first flight mission to Jupiter—the Jupiter Icy Moon Orbiter—expected to launch in 2017 and explore for a decade. Project Prometheus received $430 million in 200r budget.

In 2003, NASA's Project Prometheus successfully tested a High Power Electric Propulsion (HiPEP) ion engine. This operates by ionizing xenon with microwaves. At the rear of the engine is a pair of rectangular metal grids that are charged with 6,000 volts of electric potential. The force of this electric field exerts a strong electrostatic pull on the xenon ions, accelerating them and producing the thrust needed to propel the spacecraft. The design was tested at up to 12 kW, though twice that is envisaged. The thruster is designed for a 7- to 10-year lifetime with high fuel efficiency, and to be powered by a small nuclear reactor.

The World Nuclear Association is the global private-sector organization that seeks to promote the peaceful worldwide use of nuclear power as a sustainable energy resource for the coming centuries. Specifically, the WNA is concerned with nuclear power generation and all aspects of the nuclear fuel cycle, including mining, conversion, enrichment, fuel fabrication, plant manufacture, transport, and the safe disposition of spent fuel.The WNA serves its Members by facilitating their interaction on te ... (Full Bio)

Ian Hore-Lacy is Director for Public Communications at the World Nuclear Association, an international trade association based in London, and has been involved with studying uranium and nuclear power since 1995. His function is primarily focused on public information on nuclear power via the World Wide Web. He is a former biology teacher who joined the mining industry as an environmental scientist in 1974, with CRA (now Rio Tinto). He is author of Nuclear Electricity, the expanded eighth editi ... (Full Bio)