The term spacecraft is mainly used to refer to spacecraft that are real or conceived using present technology. The terms spaceship and starship are generally applied only to fictional spacecraft, usually those capable of transporting people. The spaceship is one of the prime elements in science fiction. 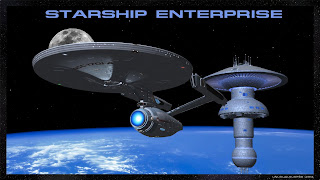 Numerous short stories and novels are built up around various ideas for spacecraft, and spacecraft have often been featured in movies. Some hard science fiction books focus on the technical details of the craft, while others treat the spacecraft as a given and delve little into its actual implementation.

Some people believe that Unidentified Flying Objects (UFOs) may be alien spacecraft (that is, not of human construction and not originating from Earth), sometimes referred to as flying saucers.

But the term UFO used here in this context refers to observed flying objects for which no identification has been made, though other meanings for the word UFO exist. To date, no known, independently verifiable examples of alien spacecraft are known to exist.