Can Science Save the World? 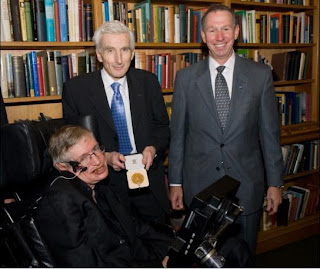 By: Prof. Martin John Rees, Ph.D.
http://www.ast.cam.ac.uk/~mjr/
Master of the University of Cambridge, and Professor of Cosmology and Astrophysics.

CAMBRIDGE – For most people, there has never been a better time to be alive than now. The innovations that drive economic advances – information technology, biotech, and nanotech – can boost living standards in both the developing and the developed world. We are becoming embedded in a cyberspace that can link anyone, anywhere, to all the world’s information and culture – and to every other person on the planet.
Twenty-first century technologies will offer environmentally benign lifestyles and the resources to ease the plight and enhance the life chances of the world’s two billion poorest people. Moreover, the greatest threat of the 1960’s and 1970’s – nuclear annihilation – has diminished. This threat could recur, however, if there is a renewed standoff between new superpowers. And there are other risks stemming from humanity’s greater collective impact on the planet, and from the growing empowerment of individuals.
Soon after World War II, physicists at the University of Chicago started a journal called the Bulletin of Atomic Scientists to promote arms control. The logo on the Bulletin’s cover is a clock, the proximity of whose hands to midnight indicates the editors’ judgment of the precariousness of the world situation. Every few years, the minute hand shifted, either forwards or backwards. It came closest to midnight in 1962 during the Cuban Missile Crisis.
When the Cold War ended, the Bulletin’s clock was put back to 17 minutes to midnight. But the clock has been creeping forward again. We are confronted by proliferation of nuclear weapons (by, say, North Korea and Iran). Al-Qaeda-style terrorists might willingly detonate a nuclear weapon in a city center, killing tens of thousands.
Even if the nuclear threat is contained, the twenty-first century could confront us with grave new global perils. Climate change looms as this century’s primary long-term environmental challenge. Human actions – burning fossil fuels – have already raised the carbon dioxide concentration higher than it has ever been in the last 500,000 years, and it is rising by about 0.5 % a year.
More disturbingly, coal, oil, and gas are projected to supply most of the world’s growing energy needs for decades to come. If that continues, the concentration of CO2 will rise to twice the pre-industrial level by 2050, and three times that level later in the century.
The world spends nearly $7 trillion a year on energy and its infrastructure; yet our current research and development efforts are not up to meeting the challenge of climate change. There is no single solution, but some measures, like better insulation of buildings, would save rather than cost money.
Efforts to economize on energy, storing it, and generating it by “clean” or low-carbon methods deserve priority and the sort of commitment from governments that were accorded to the Manhattan Project (which created the atomic bomb) or the Apollo moon landing.
The top priority should be a coordinated effort by Europe, the United States, and the other G-8+5 countries to build demonstration plants to develop carbon capture and storage (CCS) technology. This is crucial, because whatever technical advances there may be in solar and other renewable energy sources, we will depend on coal and oil for the next 40 years. Yet unless the rising curve of annual emissions can be reversed, the CO2 concentration will irrevocably reach a truly threatening level.
Mankind must also confront other global “threats without enemies” that are separate from (though linked with) climate change. Loss of biological diversity is one of the most severe such threats. The extinction rate is 1,000 times higher than normal, and is increasing.
Biodiversity is a crucial component of human well-being and economic growth. We are clearly harmed if fish stocks dwindle to extinction. Less evidently, there are plants in the rain forest whose gene pool might be useful to us.
The pressures on our planet depend, of course, on our lifestyle. The world could not sustain its 6.5 billion people if they all lived like present-day Americans. But it could if even prosperous people adopted a vegetarian diet, traveled little, and interacted virtually. New technology will determine our lifestyle, and the demands that we make on energy and environmental resources.
Nevertheless, our problems are aggravated by rapid growth in the human population, which is projected to reach eight or even nine billion by 2050. If the increase continues beyond 2050, one cannot help but be gloomy about most people’s prospects.
There are now, however, more than 60 countries where the fertility rate is below replacement level. If this were true of all countries, the global population would start to decline after 2050 – a development that would surely be benign.
All of today’s developments – cyber, bio, or nano – will create new risks of abuse. The American National Academy of Sciences has warned that, “Just a few individuals with specialized skills…could inexpensively and easily produce a panoply of lethal biological weapons.…The deciphering of the human genome sequence and the complete elucidation of numerous pathogen genomes…allow science to be misused to create new agents of mass destruction.”
Not even an organized network would be required; just a fanatic with the mindset of those who now design computer viruses. The global village will have its village idiots.
In our increasingly interconnected world, there are new risks whose consequences could be widespread – and perhaps global. Even a tiny probability of global catastrophe is unacceptable. If we apply to catastrophic risks the same prudent analysis that leads us to buy insurance – multiplying probability by consequences – we would surely prioritize measures to reduce this kind of extreme risk. The decisions that we will make both individually and collectively in the foreseeable future will determine whether twenty-first century science yields benign or devastating outcomes.
By:
Lord Rees is Britain’s Astronomer Royal, President of the Royal Society, Master of the University of Cambridge’s Trinity College, and Professor of Cosmology and Astrophysics.