Question About Gravitation Part I 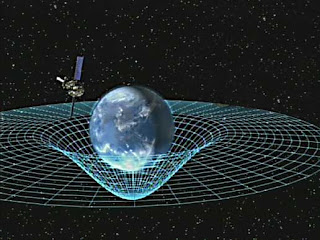 Edited and Added By:

Faculty of Sciences and Mathematics, Indonesian University of Education

Gravitation is a natural phenomenon by which objects with mass attract one another. In everyday life, gravitation is most commonly thought of as the agency which lends weight to objects with mass. Gravitation causes dispersed matter to coalesce, thus accounting for the existence of the Earth, the Sun, and most of the macroscopic objects in the universe. It is responsible for keeping the Earth and the other planets in their orbits around the Sun; for keeping the Moon in its orbit around the Earth; for the formation of tides; for convection, by which fluid flow occurs under the influence of a density gradient and gravity; for heating the interiors of forming stars and planets to very high temperatures; and for various other phenomena observed on Earth. Modern physics describes gravitation using the general theory of relativity, in which gravitation is a consequence of the curvature of spacetime which governs the motion of inertial objects. The simpler Newton's law of universal gravitation provides an accurate approximation for most calculations.
(Wikipedia)


Q: What is gravity?


A: The answer cannot be found in today's theories. Newton only claimed that gravity was an attracting force between all objects because that's the way things appear objects fall to the Earth or approach each other when floating in outer space. So Newton understandably claimed that it must be some type of attracting force emanating from objects, but he gave no scientific explanation for this force.


Why does it attract and not repel? How does it cause falling objects and orbiting planets without drawing on any known power source? Einstein was so dissatisfied with our lack of understanding about gravity even two centuries after Newton that he invented an entirely new theory of gravity, known as General Relativity.


Yet this theory doesn’t solve these problems either, adding that since everything in 3-dimensional space takes time to occur we must include our time measurement as a literal 4th physical dimension of our universe’s structure hence "4-D space-time", which somehow warps 4-dimensionally in the presence of matter for still-unexplained reasons, presumably explaining gravity.


In addition to the increase in unanswered questions with General Relativity, it has been found to completely fail even to explain the motion of stars in galaxies. This has led to the further invention of exotic "Dark Matter", said to invisibly fill galaxies, rather than questioning Einstein’s theory and the often-repeated claim that it has been tested to extreme accuracy.


Add to this the fact that there are still a half-dozen theories of gravity officially under consideration at the moment, all with different physical description of gravity, and it is no wonder many are still asking:

"What is gravity?" From "Nailing Down Gravity", Discover Magazine, Oct 2003: For Michael Martin Nieto, a theoretical physicist at Los Alamos National Laboratory in New Mexico, the mystery involves much more than a few hunks of spacefaring hardware; it reveals that there might be something wrong with our understanding of gravity, the most pervasive force in the universe.

"We don't know anything," he says. "Everything about gravity is mysterious".