French standard NF E 01-010 gives the following definition: “approach aiming at the synergistic integration of mechanics, electronics, control theory, and computer science within product design and manufacturing, in order to improve and/or optimize its functionality". 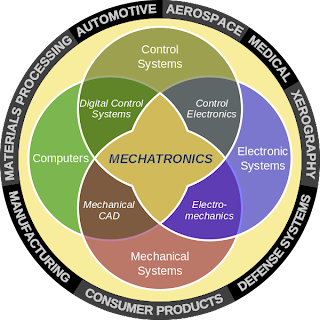 A mechatronics engineer unites the principles of mechanics, electronics, and computing to generate a simpler, more economical and reliable system. Mechatronics is centered on mechanics, electronics, computing, control engineering, molecular engineering (from nanochemistry and biology), and optical engineering, which, combined, make possible the generation of simpler, more economical, reliable and versatile systems. The portmanteau "mechatronics" was coined by Tetsuro Mori, the senior engineer of the Japanese company Yaskawa in 1969. An industrial robot is a prime example of a mechatronics system; it includes aspects of electronics, mechanics, and computing to do its day-to-day jobs.

Engineering cybernetics deals with the question of control engineering of mechatronic systems. It is used to control or regulate such a system (see control theory). Through collaboration, the mechatronic modules perform the production goals and inherit flexible and agile manufacturing properties in the production scheme. Modern production equipment consists of mechatronic modules that are integrated according to a control architecture. The most known architectures involve hierarchy, polyarchy, heterarchy, and hybrid. The methods for achieving a technical effect are described by control algorithms, which might or might not utilize formal methods in their design. Hybrid systems important to mechatronics include production systems, synergy drives, planetary exploration rovers, automotive subsystems such as anti-lock braking systems and spin-assist, and every-day equipment such as autofocus cameras, video, hard disks, and CD players.

Mechatronic students take courses from across the various fields listed below: