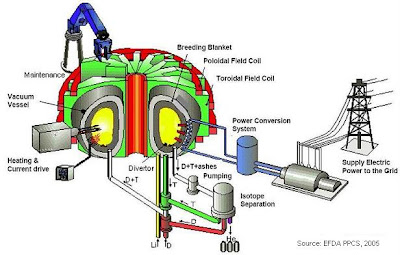 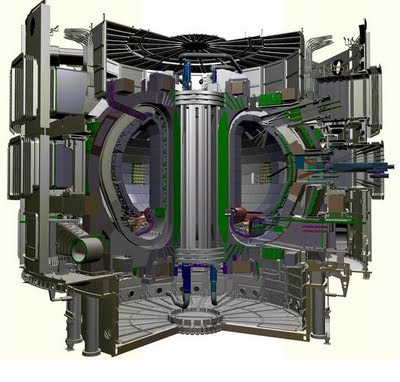 Fusion power is the power generated by nuclear fusion processes. In fusion reactions two light atomic nuclei fuse together to form a heavier nucleus (in contrast with fission power). In doing so they release a comparatively large amount of energy arising from the binding energy due to the strong nuclear force which is manifested as an increase in temperature of the reactants. Fusion power is a primary area of research in plasma physics.
The term is commonly used to refer to potential commercial production of net usable power from a fusion source, similar to the usage of the term "steam power." The leading designs for controlled fusion research use magnetic (tokamak design) or inertial (laser) confinement of a plasma, with heat from the fusion reactions used to operate a steam turbine which in turn drives electrical generators, similar to the process used in fossil fuel and nuclear fission power stations.

While fusion power is still in early stages of development, substantial sums have been and continue to be invested in research. In the EU almost € 10 billion was spent on fusion research up to the end of the 1990s, and the new ITER reactor alone is budgeted at € 10 billion. It is estimated that up to the point of possible implementation of electricity generation by nuclear fusion, R&D will need further promotion totalling around € 60-80 billion over a period of 50 years or so (of which € 20-30 billion within the EU). Nuclear fusion research receives € 750 million (excluding ITER funding), compared with € 810 million for all non-nuclear energy research combined, putting research into fusion power well ahead of that of any single rivaling technology. 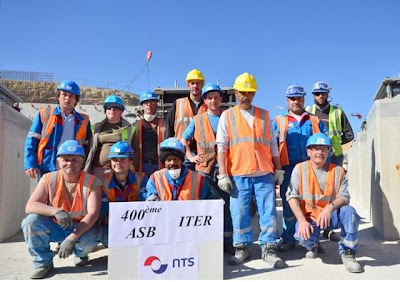