Current generations of nuclear submarines never need to be refueled throughout their 25-year lifespans.

Conversely, the limited power stored in electric batteries means that even the most advanced conventional submarine can only remain submerged for a few days at slow speed, and only a few hours at top speed; recent advances in air-independent propulsion have eroded this disadvantage somewhat.

The high cost of nuclear technology means that relatively few states have fielded nuclear submarines. Some of the most serious nuclear and radiation accidents ever to occur have involved Soviet nuclear submarine mishaps.

The VMF Typhoon class submarine, is nuclear-powered and the world's largest-displacement submarine.

The Science and Technology of Nuclear Submarine


The main difference between conventional submarines and nuclear submarines is the power generation system. Nuclear submarines employ nuclear reactors for this task. They either generate electricity that powers electric motors connected to the propeller shaft or rely on the reactor heat to produce steam that drives steam turbines (cf. nuclear marine propulsion).

Reactors used in submarines typically use highly enriched fuel (often greater than 20%) to enable them to deliver a large amount of power from a smaller reactor and operate longer between refuelings – which are difficult due to the reactor's position within the submarine's pressure hull.


The nuclear reactor also supplies power to the submarine's other subsystems, such as for maintenance of air quality, fresh water production by distilling salt water from the ocean, temperature regulation, etc. All naval nuclear reactors currently in use are operated with diesel generators as a backup power system.

These engines are able to provide emergency electrical power for reactor decay heat removal, as well as enough electric power to supply an emergency propulsion mechanism. Submarines may carry nuclear fuel for up to 30 years of operation. The only resource that limits the time underwater is the food supply for the crew and maintenance of the vessel. 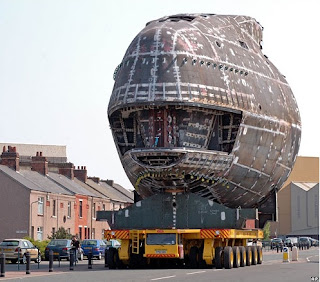 The stealth weakness of nuclear submarines is the need to cool the reactor even when the submarine is not moving; about 70% of the reactor output heat is dissipated into the sea water. This leaves a "thermal wake", a plume of warm water of lower density which ascends to the sea surface and creates a "thermal scar" that is observable by thermal imaging systems, e.g., FLIR.

Another problem is that the reactor is always running, creating steam noise, which can be heard on SONAR, and the reactor pump (used to circulate reactor coolant), also creates noise, as opposed to a conventional submarine, which can move about on incredibly silent electric motors.