Intelligence is the Ability to Adapt to Change

i/ˈstiːvən ˈhɔːkɪŋ/ STEE-vən HAW-king; born 8 January 1942) is an English theoretical physicist, cosmologist, author and Director of Research at the Centre for Theoretical Cosmology within the University of Cambridge.

Among his significant scientific works have been a collaboration with Roger Penrose on gravitational singularities theorems in the framework of general relativity, and the theoretical prediction that black holes emit radiation, often called Hawking radiation. Hawking was the first to set forth a cosmology explained by a union of the general theory of relativity and quantum mechanics. He is a vocal supporter of the many-worlds interpretation of quantum mechanics.

He is an Honorary Fellow of the Royal Society of Arts, a lifetime member of the Pontifical Academy of Sciences, and a recipient of the Presidential Medal of Freedom, the highest civilian award in the United States. Hawking was the Lucasian Professor of Mathematics at the University of Cambridge between 1979 and 2009.

Hawking has achieved success with works of popular science in which he discusses his own theories and cosmology in general; his A Brief History of Time stayed on the British Sunday Times best-sellers list for a record-breaking 237 weeks. Hawking has a motor neuron disease related to amyotrophic lateral sclerosis (ALS), a condition that has progressed over the years. He is almost entirely paralysed and communicates through a speech generating device. He married twice and has three children. In September 2013, he expressed support for the legalization of assisted suicide for the terminally ill. 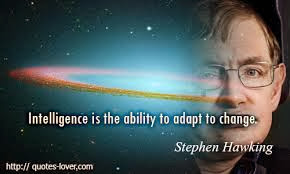 Hawking's first year as a doctoral student was a difficult one. He was initially disappointed to find that he had been assigned Dennis William Sciama as a supervisor rather than Fred Hoyle, and he found his training in mathematics inadequate for work in general relativity and cosmology.


He also struggled with his health. Hawking had experienced increasing clumsiness during his final year at Oxford, including a fall on some stairs and difficulties when rowing.


The problems worsened, and his speech became slightly slurred; his family noticed the changes when he returned home for Christmas and medical investigations were begun.The diagnosis of motor neurone disease came when Hawking was 21. At the time, doctors gave him a life expectancy of two years.

After his diagnosis, Hawking fell into a depression; though his doctors advised that he continue with his studies, he felt there was little point.

At the same time, however, his relationship with Jane Wilde, friend of his sister, and whom he had met shortly before his diagnosis, continued to develop. The couple were engaged in October 1964.

Hawking later said that the engagement "gave him something to live for."

Despite the disease's progression Hawking had difficulty walking without support, and his speech was almost unintelligible he now returned to his work with enthusiasm.

Hawking started developing a reputation for brilliance and brashness when he publicly challenged the work of Fred Hoyle and his student Jayant Narlikar at a lecture in June 1964.

When Hawking began his graduate studies, there was much debate in the physics community about the prevailing theories of the creation of the universe: the Big Bang and the Steady State theories.
Inspired by Roger Penrose's theorem of a spacetime singularity in the centre of black holes, Hawking applied the same thinking to the entire universe, and during 1965 wrote up his thesis on this topic.
There were other positive developments: Hawking received a research fellowship at Gonville and Caius College, and he and Jane were married on July 14, 1965.
He obtained his D.Phil. degree in March 1966, and his essay entitled "Singularities and the Geometry of Space-Time" shared top honours with one by Penrose to win that year's Adams Prize.
Sumber:
Wikipedia