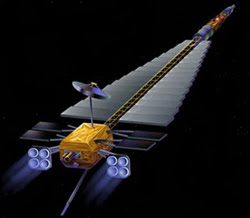 This EOE article is adapted from an information paper published by the World Nuclear Association (WNA). WNA information papers are frequently updated, so for greater detail or more up to date numbers, please see the latest version on WNA website.

So far, radioisotope thermoelectric generators (RTGs) have been the main power source for US space work over more than 40 years, since 1961. The high decay heat of plutonium-238 (238Pu) (0.56 W/g) enables its use as an electricity source in the RTGs of spacecraft, satellites, navigation beacons, etc. Heat from the oxide fuel is converted to electricity through static thermoelectric elements (solid-state thermocouples), with no moving parts. RTGs are safe, reliable and maintenance-free, and can provide heat or electricity for decades under very harsh conditions, particularly where solar power is not feasible.


Thus far, 45 RTGs have powered 25 US space vehicles including Apollo, Pioneer, Viking, Voyager, Galileo, Ulysses and New Horizons space missions as well as many civil and military satellites. The Cassini spacecraft carries three RTGs providing 870 watts of power en route to Saturn. Voyager spacecraft which have sent back pictures of distant planets have already operated for over 20 years and are expected to send back signals powered by their RTGs for another 15-25 years. The Viking and Rover landers on Mars depended on RTG power sources, as will the Mars Rovers to be launched in 2009.

The latest RTG is a 290 watt system known as the GPHS RTG. The thermal power source for this system is the General Purpose Heat Source (GPHS). Each GPHS contains four iridium-clad 238Pu fuel pellets, stands 5 cm tall, 10 cm square and weighs 1.44 kg. Eighteen GPHS units power one GPHS RTG. The Multi-Mission RTG (MMRTG), a current research focus, will use 8 GPHS units producing 2 kW that can then be used to generate 100 watts of electricity.

The Stirling Radioisotope Generator (SRG) is based on a 55-watt electric converter powered by one GPHS unit. The hot end of the Stirling converter reaches 650°C and heated helium drives a free piston reciprocating in a linear alternator, heat being rejected at the cold end of the engine. The AC is then converted to 55 watts direct current (DC). This Stirling engine produces about four times as much electric power from the plutonium fuel than an RTG. Thus each SRG will utilize two Stirling converter units with about 500 watts of thermal power supplied by two GPHS units and will deliver 100-120 watts of electric power. The SRG has been extensively tested but has not yet flown.

Russia has also developed RTGs using polonium-210—two are still in orbit on 1965 Cosmos navigation satellites. But Russian research was primarily focused on fission reactors for space power systems. In addition to RTGs, Radioactive Heater Units (RHUs) are used on satellites and spacecraft to keep instruments warm enough to function efficiently. Their output is only about one watt and they mostly use 238Pu—typically about 2.7g. Dimensions are about 3 cm long and 2.5 cm diameter, weighing 40 grams. Some 240 have been used so far by the US and two are in shut-down Russian Lunar Rovers on the moon. There will be eight on each of the US Mars Rovers launched in 2003.

Both RTGs and RHUs are designed to survive major launch and re-entry accidents intact, as is the SRG.

Over 100 kWe, fission systems have a distinct cost advantage over RTGs.


The US SNAP-10A launched in 1965 was a 45 kWt thermal nuclear fission reactor that produced 650 watts using a thermoelectric converter and operated for 43 days; it was shut down due to a satellite (not reactor) malfunction but remains in orbit today.

The last US space reactor initiative was a joint NASA-DOE-Defence Department program developing the SP-100 reactor—a 2 MWt fast reactor unit and thermoelectric system delivering up to 100 kWe as a multi-use power supply for orbiting missions or as a lunar/Martian surface power station. This was terminated in the early 1990s after absorbing nearly US$1 billion. The design used uranium nitride fuel and was lithium-cooled.

There was also a Timberwind pebble bed reactor (PBR) concept under the Defence Department Multi-Megawatt (MMW) space power program during the late 1980s, in collaboration with Department of Energy (DOE). This had power requirements well beyond any civil space program.


Between 1967 and 1988, the former Soviet Union launched 31 low-powered fission reactors in Radar Ocean Reconnaissance Satellites (RORSATs) on Cosmos missions. They utilized thermoelectric converters to produce electricity, as with the RTGs. Romashka reactors were their initial nuclear power source, a fast spectrum graphite reactor with 90%-enriched uranium carbide fuel operating at high temperature. The Bouk fast reactor then produced 3 kW for up to 4 months. Later reactors, such as on Cosmos-954 that re-entered over Canada in 1978, had uranium-molybdenum fuel rods and a layout similar to the US heatpipe reactors described below.

These designs were followed by the Topaz reactors with thermionic conversion systems, generating about 5 kWe of electricity for on-board uses. This was a US idea developed during the 1960s in Russia. In Topaz-2, each fuel pin (96% enriched uranium dioxide (UO2)), sheathed in an emitter, is surrounded by a collector that form the 37 fuel elements which penetrate the cylindrical ZrH moderator. This in turn is surrounded by a beryllium neutron reflector containing 12 rotating control drums. NaK (a sodium-potassium alloy) coolant surrounds each fuel element.

Topaz-1 was flown in 1987 on Cosmos 1818 and 1867. It was capable of delivering power for 3-5 years for ocean surveillance. Later Topaz designs were aiming for 40 kWe via an international project, undertaken largely in the USA starting in 1990. Two Topaz-2 reactors (without fuel) were sold to the USA in 1992. Budget restrictions in 1993 forced cancellation of a Nuclear Electric Propulsion Spaceflight Test Program associated with this reactor design.

For spacecraft propulsion, once launched, some experience has been gained with nuclear thermal propulsion systems (NTR), that are said to be well-developed and proven. Nuclear fission heats a hydrogen propellant that is stored as liquid in cooled tanks. The hot gas (about 2500°C) is expelled through a nozzle to give thrust that may be augmented by injection of liquid oxygen into the supersonic hydrogen exhaust; this is more efficient than chemical reactions. Bimodal versions will run electrical systems on board a spacecraft, including powerful radars, as well as provide propulsion. Compared with nuclear electric plasma systems, these have much more thrust for shorter periods and can be used for launches and landings.

However, attention is now turning to nuclear electric systems, where nuclear reactors are a heat source for electric ion drives, expelling plasma out of a nozzle to propel spacecraft already in space. Superconducting magnetic cells ionize hydrogen or xenon, heat it to extremely high temperatures (millions °C), accelerate it and expel it at very high velocity (e.g., 30 km/sec) to provide thrust. Research on one version, the Variable Specific Impulse Magnetoplasma Rocket (VASIMR), draws on that for magnetically-confined fusion power (tokamak) for electricity generation, but here the plasma is deliberately leaked to give thrust. The system works most efficiently at low thrust (that can be sustained), with small plasma flow, but high thrust operation is possible. The design is very efficient, with 99% conversion of electric to kinetic energy.