Edited and Added By:


Department of Physics
Faculty of Sciences and Mathematics, Indonesia University of Education 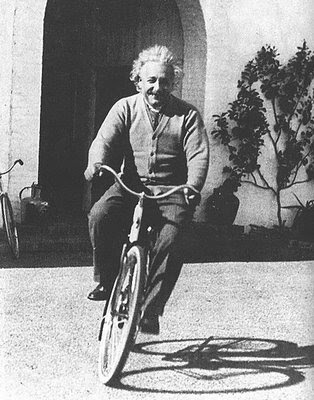 
Q: Where does Einstein's famous E = mc2 equation come from, why does this simple equation apply to the atom bomb, and how is it that matter converts into pure energy?

A: This equation has been largely misunderstood and misrepresented. It is often shown in complex mathematical derivations and is said to literally describe matter mysteriously converting into energy in an atom-bomb explosion -- a process that is completely unexplained even today. But, in actuality, this equation is extremely easy to derive in only a few lines of simple math, and does not truly describe a process as mysterious as a transformation of "matter into energy".

For starters, consider that the classic kinetic energy equation, K.E. = ½mv2, is almost identical to Einstein's equation. In fact, it only differs by the factor-of-two term. That is, if we write the kinetic energy of an object traveling at light speed, the classic kinetic energy equation would be E = ½mc2. This is precisely Einstein's equation, only divided by two. So, why are these two equations so similar, and what does this really tell us about the nature of light, energy, and the atomic bomb? Here's a further hint in a simple four-line derivation that can easily be arrived at for Einstein's equation, based on well-known equations for the momentum of light:
p = E/c        — momentum of light, p, equals its energy content divided by its speed
p = mc         — momentum of light, stated in terms of its classical momentum, mass x speed
E/c = mc      — equating the two momentum terms in the two lines above
E = mc2       — rearranging the above line gives Einstein’s famous equation

Q: Science says protons are positively charged and tightly clustered in the nucleus, but like-charges would strongly repel in such close proximity. Why doesn’t the nucleus fly apart?

A: This mystery has no true answer in today's science. Scientists used to scratch their heads over this issue decades ago until they simply decided the answer must be that some type of mysterious attracting force must appear for some unexplained reason between protons when they are very close, counteracting their mutual repulsion. This mysterious new attracting force is called the Strong Nuclear Force, and is now taught as one of the four fundamental forces of nature in today’s science.

Where is the power source behind this endless repulsion, and how can it be that this mysterious power source is never drained or even diminished in the slightest? Benjamin Franklin invented this Electric Charge Theory to explain why charged objects repel or cling to each other, but his theory overlooked the fact that this concept violates our most basic laws of physics. Objects or particles should not be able toendlessly attract or repel each other, and without even a power source in sight.

This is the first problem with positively charged protons in the nucleus, and also with the concept of negatively charged electrons held in orbit about the nucleus by an endless unknown power source.Secondly, this clearly flawed concept in our science legacy was merely glossed over and patched with yet another scientifically unexplained force the Strong Nuclear Force.

Now we have two scientifically unexplained forces behind the stability of the atom (the Electromagnetic Forcebetween charged particles and the Strong Nuclear Force), both acting endlessly and with no known power source.

Q: So does this mean our entire atomic theory is wrong  both the old "solar system" atomic model and today’s quantum-mechanical one?

A: Yes, of course it does. Scientifically impossible theories that violate our common sense and our fundamental laws of physics are the hallmark of bad science and do not belong in our scientific beliefs. There is nothing wrong with creating useful working models to help us to think about our world while we continue searching, but our legacy of working models has been mistaken for true knowledge and understanding.

Many of today’s scientists now take Newton’s working model of gravity literally, as if there were truly an endless gravitational force emanating from the atom. Others literally believe in Einstein's even more mysterious gravitational model of the atom somehow warping a 4-dimensional realm around it.

We are also taught to literally accept models of the inner atom in which endless, completely unexplained electromagnetic and strong nuclear forces are at work, now said to act according to bizarre quantum-mechanical" laws.

Further, magnetic materials such as iron are said to have atoms that possess inherent magnetism  magnetic energy that operates endlessly and with no known power source, giving us permanent magnets.

Q: A major feature of the anticipated Theory Of Everything is that it finally shows where our natural constants originate vs. just measuring them today. Does The Final Theory do this?

Q: If this is truly the final theory, shouldn’t it say something about time as well?

A: Yes it should, and it does. The concept of time in today's science is more science-fiction than science. Our scientific beliefs about time, based on Einstein’s Special Relativity Theory, state that time varies with relative speed, meaning that the laws of chemistry and physics would have to vary between all moons and planets, which all differ in relative speed. A growing number of scientists even believe time travel is possible via some sort of cosmic-sized, wormhole-based time machines powered by unfathomable amounts of "negative energy". All manner of fanciful beliefs surround the concept of time in today’s science.

But time is actually very easily understood, with none of the bizarre features of today’s science. For example, although we commonly think oftime as driving events in our world, it is purely energy that drives everything. Take the batteries out of a clock and it stops, regardless of any notion of time.

But what is energy and how does it relate to time? According to our laws of physics energy can change form but can never be destroyed, which means it always remains active and available without ever tiring. But what drives the tireless availability and endless activity of energy? Today’s understanding of energy differs little from stories of magic a mysterious, ethereal, active entity that we have learned to control via various devices.

We really know little more about the true nature of energy when we stop to think about it. But, all forms of energy are easily understood in clear physical terms from the new perspective in The Final Theory, giving a powerful new understanding of the concepts of both energy and time that hold such mystery for us today.

Q: Lots of good points but if even our most basic science is so full of holes why do scientists simply ignore this and forge ahead inventing more bizarre new theories to add to the fray?

A: What else can they do? No doubt they would gladly fix all these glaring problems if they had the proper understanding, but they don’t. They are our science authority today and so are unwilling to admit that all they really know is what they've been told  a centuries-old legacy of scientifically impossible beliefs from a much simpler time (electrons and galaxies have been known for barely a century). Since our scientists still lack a true understanding of our universe they have little choice but to staunchly defend the science legacy they have inherited, continuing to work within this flawed framework. These working models have served us well during the past few centuries of our scientific infancy, but we are now sophisticated enough that we cannot pretend they literally describe our world anymore.

Q: So, what can be done about this situation?

A: Read The Final Theory and spread the word! Until now it has been pointless to challenge the accepted science paradigm (although some have tried) since no one had arrived at the understanding that truly explains our world. The Final Theory finally gives this knowledge and understanding to the public, which, as history has shown time and time again, is where all revolutions must begin. Don’t wait for today’s science authorities to admit how little they truly know and embrace a theory that shows everything they profess is wrong it may be a very long wait! Read The Final Theory, reclaim your birthright to truly understand your universe in your lifetime, and be part of the coming scientific revolution!


Q: If The Final Theory is the revolutionary Theory Of Everything, why isn't it headline news? Why haven't I heard of it? Why isn't it in stores?


A: You have heard of it this is your notification. The book is newly published, promotion is just starting and you are one of the first to discover it. As such, it hasn't become headline news yet. Everything needs a beginning, even the Theory Of Everything. Unfortunately, many misguided attempts at this theory have already been made. This shows that many people know something is wrong with our science so much so that they are trying desperately to fix it  themselves but many of these enthusiasts have ultimately done more harm than good by forcefully pushing their pet theories in the face of clear flaws.


For better or worse, The Final Theory has arrived in the midst of this rather tarnished environment, making it difficult for the scientific community or the press to give it due consideration. The Final Theory isn't in bookstores at the moment because it is published by a Print-On-Demand publisher, which only prints and ships copies as they are ordered.

P.O.D publishers do not print thousands of copies up front and distribute them to bookstores. Although P.O.D. is fast becoming a popular publication method, and the quality and appearance of the books are identical to those on the shelves, most book reviewers and columnists are not accustomed to this method and will not consider P.O.D. titles for review.

Due to these realities, The Final Theory won't appear widely in the media, the scientific press, or the corner bookstore for the moment. It is up to individual seekers to order it and read it for themselves. As such, this FAQ was created to give as much information as possible to potential readers, considering that it is not possible to flip through the book before purchasing.

Q: If this really is the Theory Of Everything and the answers are so simple, why not just state what this new theory says here?

A: Although the answers are indeed solid and simple, very rational and commonsense, and completely developed in the book, they do still represent a completely different perspective on all of our science and experience; you will never view even falling objects the same way again after reading this book!

Such a radical new perspective on our universe requires a proper context and solid foundation. Otherwise many questions come to mind  if that is so, then what about this? And how does it explain that? Etc.


Rest assured that all questions are fully addressed and all points clearly explained in the book, but justice couldn't be done to this new theory in any less than the 400+ pages it contains  there would be too many doubts and questions otherwise. The theory itself is not complicated, but it must be solidly applied to every aspect of our science and our personal experience, from Newtonian gravity to quantum mechanics and everything in between. This FAQ clearly shows many major flaws in our current science  many of which are not even currently recognized today and goes as far as possible and reasonable to show that the author knows what he is talking about and that The Final Theory has the answers. The rest is up to you!