"Enthusiasm is followed by disappointment and even depression, and then by renewed enthusiasm."
*Murray Gell-Mann*

George W. Beadle was awarded the Nobel Prize in Physiology or Medicine in 1958 for his “one gene-one enzyme” theory of gene action. His early experiments with Drosophila revealed that even such an apparently simple characteristic as eye color was the result of a long series of genetically determined chemical reactions.

Later experiments with the bread mold Neurospora enabled him to conclude that each gene determined the structure of a particular enzyme, which in turn controlled a single chemical reaction.

A pioneer in the field of biochemical genetics, the series of discoveries he made between 1941 and 1953 closed out the era of classical genetics à la Morgan and ushered in the molecular age.


Beadle came to Caltech in 1931, after earning his PhD in corn genetics from Cornell University and having been awarded a National Research Council Fellowship to do postdoctoral work in Thomas Hunt Morgan’s Division of Biology.

He spent several subsequent years on other genetic research in collaboration with scientists at the Institut de Biologie Physico-Chimique in Paris, at Harvard, and at Stanford. In 1946, he became professor and chairman of the biology division at Caltech, where he remaineduntil 1960, when he was named chancellor of the University of Chicago.

After retiring from that position, he directed the American Medical Association’s Institute for Biomedical Research from 1968 to 1970. He also returned to experimental biology, working on a problem close to his heart: the origin of maize.


Donald Glaser was awarded the Nobel Prize in Physics in 1960 for his invention of the bubble chamber. This instrument became widely used in physics research because it allowed scientists to observe the behavior of subatomic particles and to measure their paths precisely.


In 1946, after completing his undergraduate work at the Case Institute of Technology in Cleveland, Glaser came to Caltech to pursue graduate study with Carl Anderson. He received his PhD in physics from the Institute in 1949.


He then joined the physics faculty at the University of Michigan, where he taught and pursued research that led to the development of the bubble chamber. In 1959, Glaser left Michigan to teach at the University of California, Berkeley. He was named professor of physics and molecular biology in 1964.


Rudolf Mössbauer was a cowinner (with Robert Hofstadter) of the 1961 Nobel Prize in Physics for his discovery of the Mössbauer effect. He was 32 years old when he received the prize, one of the youngest scientists ever to be so honored.

The effect that bears his name involves the production of gamma rays of a single, precise energy from the nuclei of atoms embedded in crystals. It is a yardstick that makes it possible to measure with an unprecedented sensitivity the effects of gravity, electricity, and magnetism on photons and atomic nuclei.


Mössbauer first observed the effect in 1957, while still a graduate student at the Technical Academy of Munich. He received his PhD in 1958, and came to Caltech as a research fellow in 1960. He was named professor of physics in 1961.

Mössbauer returned to Munich a few years later to join the physics faculty at the Technical Academy. He was a visiting professor of physics at Caltech in 1964. 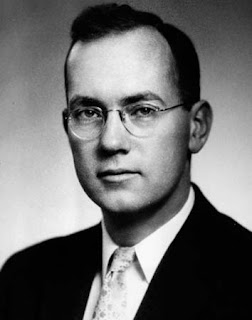 
Charles Townes was a corecipient (with the Soviet physicists Prokhorov and Basov) of the 1964 Nobel Prize in Physics for his work in the then-new field of quantum electronics, and particularly for his role in the invention of the maser and the laser.


Townes came to Caltech as a graduate student in 1937, and received his PhD in 1939. Later that year he became a member of the technical staff at Bell Labs, where he stayed until 1948.

He then joined the faculty at Columbia University, and began the work that in 1953 produced the maser (microwave amplification by stimulated emission of radiation). From 1959 to 1961 he headed the Institute for Defense Analyses in Washington, D.C. He then served as provost and professor of physics at MIT for six years.

In 1967, he went to the University of California, Berkeley, where his pioneering program in radio and infrared astronomy led to the discovery of ammonia and water molecules in the interstellar medium. He was named emeritus in 1986.


Richard Feynman shared the Nobel Prize in Physics (with Julian Schwinger and Tomonaga Shin’ichiro) in 1965 for his formulation of a comprehensive theory of quantum electrodynamics—how electrically charged particles interact with photons and with each other.

His version of this theory, and its accompanying “Feynman diagrams”—intuitive, pictorial representations of interactions among elementary particles—revolutionized the way scientists think about these processes in many fields of physics.


After receiving his PhD from Princeton University in 1942, Feynman worked on the atomic bomb project, both at Princeton and at Los Alamos, New Mexico.

At the end of the war, he joined the physics faculty at Cornell University, where he taught and continued his quantum electrodynamics research. In 1950, he became professor of theoretical physics at Caltech, where he remained for the rest of his career.

While at the Institute, he pursued a number of projects, including devising a quantum mechanical explanation of superfluidity, and developing (with Murray Gell-Mann) a theory of the weak force.

In 1968 he proposed a theory of “partons”—hypothetical hard particles inside the nucleus of the atom—that contributed to the understanding of quarks.

In 1986, Feynman became known to an even larger audience through his participation—and his famous ice-water experiment—on the Presidential Commission investigating the explosion of the Space Shuttle Challenger.


Murray Gell-Mann was awarded the Nobel Prize in Physics in 1969 for his efforts to develop a unifying scheme of classification for subatomic particles and their interactions.


Gell-Mann received his doctorate in physics from MIT in 1951, at the age of 21. In 1952 he joined the Institute for Nuclear Studies at the University of Chicago, where his research yielded the first definition of the quantum property of “strangeness.”

The concept of strangeness helped explain certain particle decay patterns that had long mystified scientists. Gell-Mann came to Caltech in 1955. Six years later, he first proposed his “Eightfold Way,” a scheme for classifying protons and neutrons into families.

This work led him to theorize further that the behavior of known particles might be explained in terms of the even more fundamental building blocks he dubbed “quarks” (the word is borrowed from James Joyce’s Finnegans Wake). Gell-Mann was appointed Robert Andrews Millikan Professor of Theoretical Physics in 1967.

He now lives in Santa Fe, New Mexico, where he is associated with the Santa Fe Institute, an interdisciplinary think-tank he cofounded in 1984.