"Everything is becoming science fiction. From the margins of an almost invisible literature has sprung the intact reality of the 20th century." 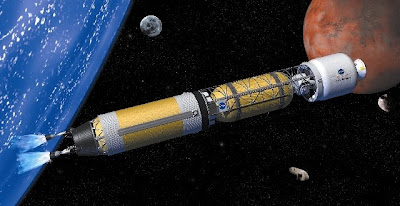 
Add and Edited By:

As part of the 22.033/22.33 Nuclear Systems Design project, this group designed a100 kWe Martian/Lunar surface reactor system to work for 5 EFPY in support of extraterrestrial human exploration efforts. The reactor design was optimized over the following criteria: small mass and size, controllability, launchability/accident safety, and high reliability. The Martian Surface Reactor was comprised of four main systems: the core, power conversion system, radiator and shielding.

The core produces 1.2 MWth and operates in a fast spectrum. Li heat pipes cool the core and couple to the power conversion system. The heat pipes compliment the chosen pin-type fuel geometry arranged in a tri-cusp configuration. The reactor fuel is UN (33.1w/o enriched), the cladding and structural materials in core are Re, and a Hf vessel encases the core. The reflector is Zr3Si2, chosen for its high albedo. Control is achieved by rotating drums, using a TaB2 shutter material. Under a wide range of postulated accident scenarios, this core remains sub-critical and poses minimal environmental hazards.

The radiator is a series of potassium heat pipes with carbon-carbon fins attached. For each core heat pipe there is one radiator heat pipe. The series of heat pipe/fin combinations form a conical shell around the reactor. There is only a 10 degree temperature drop between the heat exchanger and radiator surface, making the radiating temperature 940 K. In the radiator, the maximum cooling loss due to a single point failure is less than 1%.

The shielding system is a bi-layer shadow shield that covers an 80º arc of the core. The inner layer of the shield is a boron carbide neutron shield; the outer layer is a tungsten gamma shield. The tungsten shield is coated with SiC to prevent oxidation in the Martian atmosphere. At a distance of 11 meters from the reactor, on the shielded side, the radiation dose falls to an acceptable 2 mrem/hr; on the unshielded side, an exclusion zone extends to 14 m from the core. The shield is movable to protect crew no matter the initial orientation of the core.

When combined together, the four systems comprise the MSR. The system is roughly conical, 4.8 m in diameter and 3 m tall. The total mass of the reactor is 6.5 MT.

With the renewed interest in deep space applications, Professor A. Kadak has instituted several studies on nuclear power systems for space applications using the nuclear engineering design course offered for both graduate and undergraduate students. The first such study considered the design of nuclear electric power for propulsion and a terrestrial power station for manned Mars missions. This project was presented to NASA senior project planners in Washington DC in 2003.

Following that meeting and a subsequent meeting with Naval Reactors engineers, feedback was used to redesign the reactor from a highly efficient spent fuel Plutonium core to a highly enriched uranium core by a Master’s thesis student. This year, due to President Bush’s desire to test the new concepts on the Moon, a terrestrial 100 kwe plant was redesigned for use on both Mars and the Moon in the design project in the fall of 2004. As a result of these projects, the nuclear engineering department is gaining valuable experience in nuclear space applications.