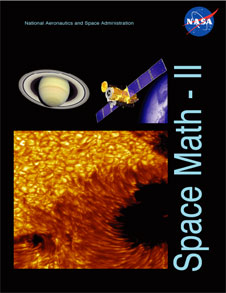 
These activities comprise a series of 24 practical mathematics applications in space science. This collection of activities is based on a weekly series of space science problems distributed to teachers during the 2005-2006 school year. The problems in this booklet investigate science and mathematics concepts such as solar energy; stars; scientific notation; and distance, rate and time. The problems are authentic glimpses of modern engineering issues that arise in designing satellites to work in space. Each word problem has background information providing insight into the basic phenomena of the sun-Earth system, specifically space weather. One-page teacher sheets with answer keys accompany the one-page assignments.