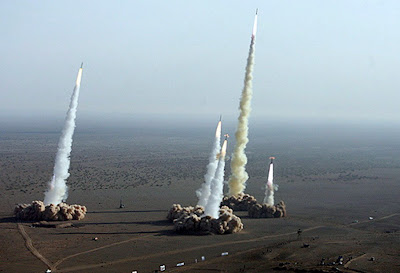 In a modern military, a missile is a self-propelled guided weapon system, as opposed to a unguided self-propelled munition, referred to as just a rocket (weapon) . Missiles have four system components:

Missiles come in types adapted for different purposes: surface-to-surface and air-to-surface missiles (ballistic, cruise, anti-ship, anti-tank, etc.), surface-to-air missiles (anti-aircraft and anti-ballistic), air-to-air missiles, and anti-satellite missiles. All known existing missiles are designed to be propelled during powered flight by chemical reactions inside a rocket engine, jet engine, or other type of engine.

Non-self-propelled airborne explosive devices are generally referred to as shells and usually have a shorter range than missiles.


The word missile comes from the Latin verb mittere, meaning "to send".
In military usage, munitions projected towards a target are broadly categorised as follows:
A common further sub-division is to consider ballistic missile to mean a munition that follows a ballistic trajectory and cruise missile to describe a munition that generates lift.